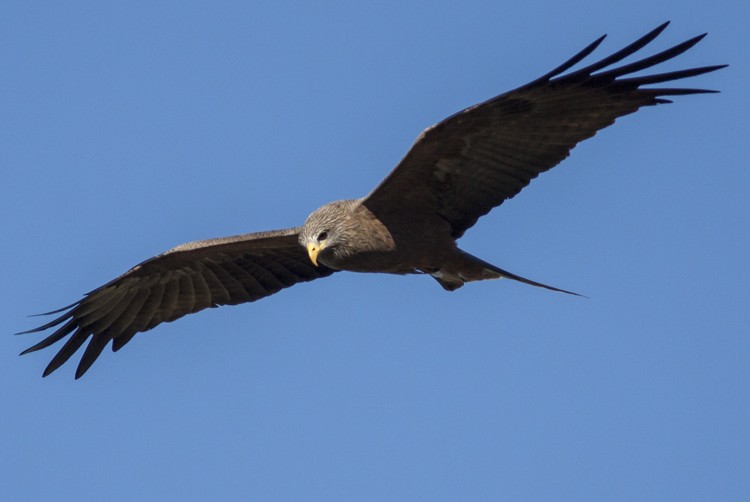 It is hard to believe that winter is behind us and within the month the first of the Yellow-billed Kites (Milvus aegyptius) will return for their annual summer visit. At Ingwelala it is the subspecies M. A. parasitus that we have come to know and view appreciatively.

It is a common intra-African breeding migrant.  The Afrikaans name is Geelbekwou.

The Yellow-billed Kite is recognised by its conspicuous yellow bill. Feather colouration is dark brown, and its tail is V-shaped. It is a medium sized raptor, and although size variation occurs it generally measures about 55 cms in height and weighs up to 1kg. Wingspan can reach 1.5 m.

Diet consists mainly of small vertebrates, insects, termites, carrion and fish. Kites are formidable fliers, assisted by their well developed tails for direction and stability. It can catch and eat its insect prey in flight. Kites are capable of sudden and accelerated bursts of speed. When termites are hatching from the ground, it is not uncommon to see several kites active in a feeding frenzy.

Scavenging also forms a large part of their diet. In this sense Kites are rather bold and with their advanced flying skills are known to pinch meat off a braai fire and snatch lunch time sandwiches out of a person’s hand. Kites are bold enough to challenge other raptors for their meals. The adjacent photograph shows a Kite tracking an African Fish Eagle, waiting opportunistically to try and steal a meal!

Yellow-billed Kites are particularly adaptable, surviving in a wide range of habitats, including urban, but dense forests are avoided. Kites enjoy all aquatic areas too. Nests are in trees, made from small sticks and lined with various materials such as plastics, bones and leaves. 2 – 3 eggs are usually laid. Incubation which averages a month is the responsibility of the female who is fed by the male during this time. All chicks are meant to survive, meaning that the first hatched does not kill or out compete its siblings.