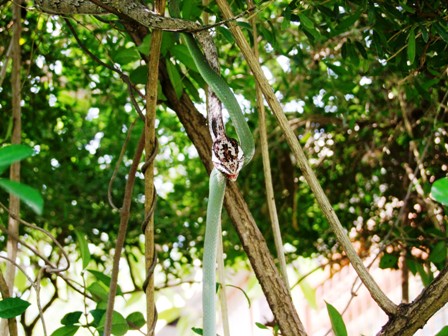 A very interesting meal was witnessed first-hand by Rob and Sylvia Vollet in Bungalow # 148. This ingestion took place in their Mbombela garden, amongst the busy branches that overhang the bird bath.

Early warning signals were initially uttered by the resident birds as they alarmed others to the presence of the highly venomous vine snake (Thelotornis capensis) moving stealthily through the shrubbery. As the vine snake continued to weave its way in a purposeful direction through the branches, the birds widened their spatial safety girth all the while their protests reaching crescendo levels. What transpired was the vine snake targeting a well-camouflaged Western Natal green snake (Philothamus natalensis occidentalis) as its next meal. Rob was fortunate to capture the sequence of events on camera:

Green snake under attack by a vine snake. 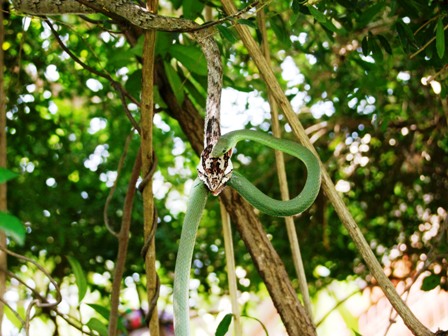 The green snake trying desperately to bite and fend off its attacker. 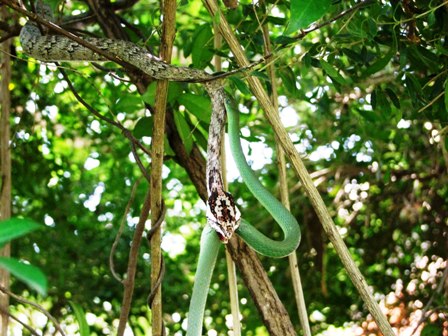 The vine snake holding its grip on the green snake. 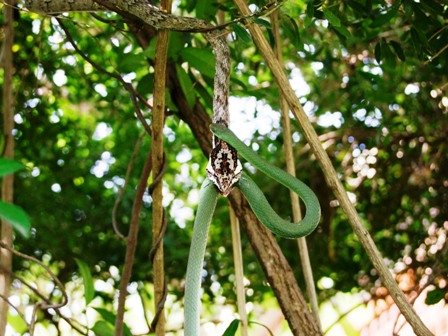 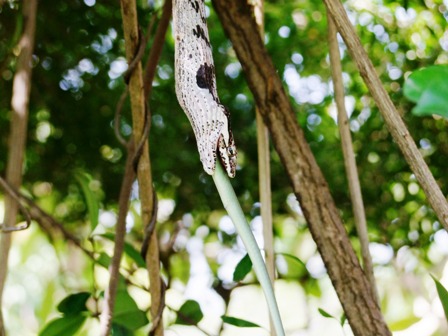 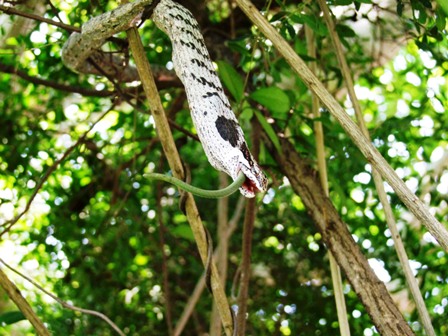 Not much more to swallow, just the tail end to go. 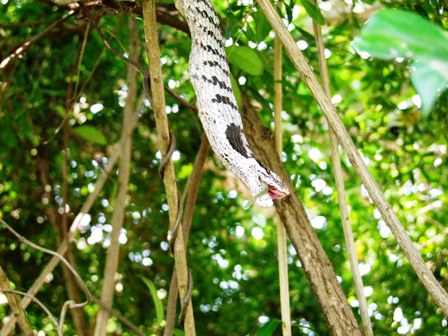 The final few centimeters disappear into the vine snake’s mouth. 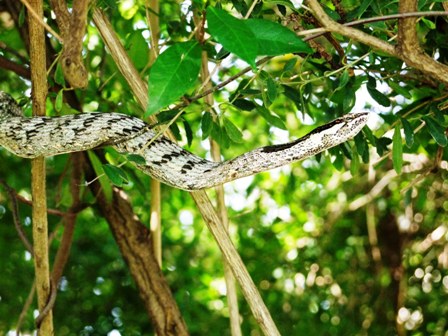 All gone and slithering off with a full belly to digest its meal.

Vine snakes are back-fanged, meaning the fangs are located towards the back of the mouth. The commonly known and much feared boomslang (Dispholidus typus) is also back-fanged. Both these species are very dangerous as their venoms are highly toxic and known to deliver fatal bites. The venom of the vine snake is haematosis, preventing blood clotting and ultimately causing all the internal organs of its prey to bleed profusely. There is no anti venom available for the vine snake. A back-fanged snake must ensure a really good grip/purchase on its prey to inject its venom, unlike a front-fanged snake where the bite is far easier due to the positioning of the fangs.

Vine snakes are slender built and can reach a length of up to 1.5 metres. They prefer to remain arboreal (living in trees and shrubs). Their cryptic colouration aids hugely in camouflage and makes them extremely difficult to spot. Their colouration makes them look like a twig or branch. Gender can be told apart by the tails, the males having longer tails. The base of the tongue is red and the forked end is black. Food includes frogs, chameleons and lizards.

Vine snakes are oviparous which means the female lays a clutch of eggs, as many as a dozen and a half in a clutch.

Natal green snakes are harmless to man. Also of slender build green snakes can reach a length of up to 1.3 metres. Colouration is usually a bright green with paler yellow under body. They can be mistaken for green mambas (Dendroaspis angusticeps).Younger snakes are sometimes darkly barred on the first third of the upper body. Green snakes are expert climbers and can move swiftly between branches when disturbed or threatened. Despite excellent camouflage, it is a favourite food source for vine snakes.  In turn it enjoys feeding on geckos and frogs.

Like the vine snake, green snakes are also oviparous, the females laying up to 14 eggs in a clutch.

If a person is bitten by a snake or suspects to have been bitten by a snake, a very useful aid is to try and identify the snake, or at least take a picture of the snake for expert identification. General (immediate) first aid is to apply a pressure bandage and to seek ASAP professional medical assistance.