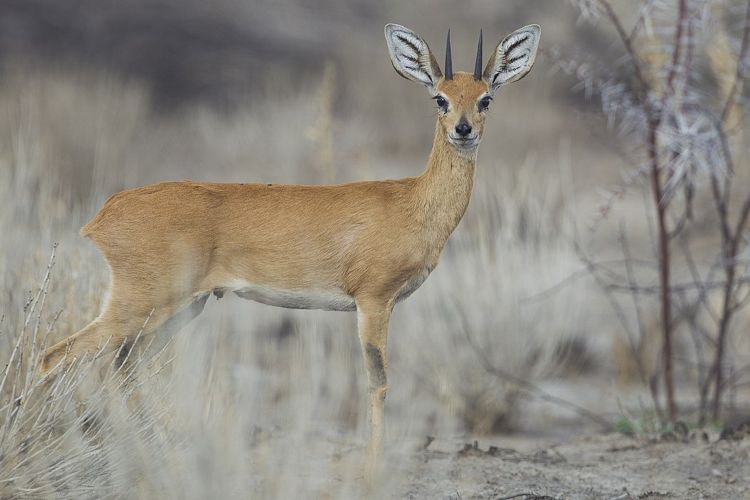 The Steenbok (Raphicerus campestris) is a small antelope that is often seen on Ingwelala. I was recently asked by a Member why currently it seems that the Steenbok numbers are more prolific than usual.

To offer a scientific explanation might require an extended sabbatical (which I’d be most partial to after completion of the new administration complex!) in order to properly research the answer. However, if this observation is in fact a true reflection of a positive increase in population numbers, my guess is that because Steenbok numbers are self regulated, meaning they are not herd animals and can survive as solitary individuals, their numbers may have increased in response to positive nutritional influences. Population trends in antelope usually track veld conditions.

Generally savanna animals require three essential elements, namely food, water and shelter as a basis for their habitat and survival. If these three resources perpetuate during a trend of “plenty” the instinct of species survival will influence animals to breed more prolifically during these times of plenty. In other words they capitalize on good times and build up their species numbers.

If we keep this discussion simple and put ourselves in a Steenbok’s shoes, umm, I mean hooves, what would give our species the chance of building up good numbers. Let’s consider the basic dependencies of food, water and shelter? Ingwelala provides sufficient water and even though Steenbok do not drink very often, water is available when required. Should the veld be in a “good” cycle or improved condition then the nutritional value of available food will increase and there is plenty of formal research to show that this increases the fecundity of antelope populations. Fecundity is a term which refers to the fertility levels within a population and how successful it is at breeding. So better quality food ensures healthier animals, which in turn promotes better breading and ensures a higher rate of calf survival. This results in an increase in population numbers.

You may then ask about shelter and how this impacts on population numbers, because more Steenbok means more food for predators, right? Yes, but then good shelter also allows for better concealment, not only to hide new recruits, but also for the adults to hide from predators. Dense vegetation also allows adult steenbok to better communicate with each other and to provide each other with social clues through scent marking used for demarcating home ranges and advertising themselves for purposes of reproduction.

Therefore during cycles of good veld condition population numbers will increase, and are just as likely to crash during more challenging times of poor veld condition.

A dozen interesting facts about Steenbok: