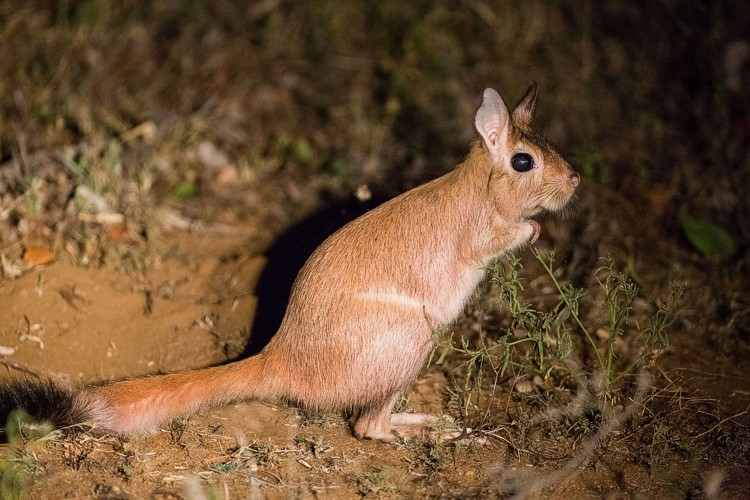 The Springhare derived its name directly from the Dutch/Afrikaans name Springhaas which describes its mobility, almost kangaroo like.

It has proportionately large hind legs which it uses to propel itself forwards using a long tail to steady its balance. Their coats are a rusty colour throughout, the exception being the end of the tail, which is black. They will most times be found resting on their hind legs with their forelegs suspended underneath the head. The springhare has large well-developed hind legs which enables it to jump large distances when in flight. The long tail used for assisting with balance, the forelegs are equipped with sharp claws used for the digging for roots and other food sources, as well as utilised for the digging of burrows. The Springhare possesses a small flap of skin below the ear which closes off the inner ear while digging and offers protection from sand and soil.

Distribution: From Southern Democratic Republic of Congo (extreme Northern range) through to the Eastern Cape in South Africa, this incorporates all the countries in between, namely, Angola, Zambia, Zimbabwe, Namibia, Botswana to name a few.

Status: Although listed as ‘least concern’ there is very little data available regarding population numbers to substantiate the fact. They are considered a vital source of food and protein for many tribes of South Africa and Botswana in particular and are actively hunted. This includes the famous San tribes on the fringes of the Kalahari. Habitat

Habitat: A preference for soft sandy soils in which digging is easier for the construction of burrows to house young and security.

Facts researched on the Internet. Words by Chris Mayes.