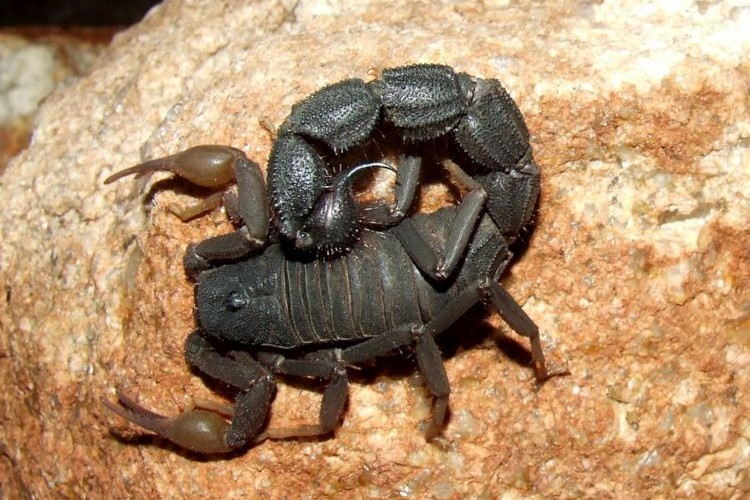 What do we know about these creatures that we share a space with? Here is an interesting article about scorpions, their habits and habitats, with advice, do's and don'ts.

Scorpions are ancient animals and fossil records indicate that they were already in existence about 425 – 450 million years ago during the Silurian period and evolved from an amphibious ancestor. They occur in habitats ranging from forest to deserts but it is in the arid areas that they are most common and diverse. Like the insects and spiders, scorpions belong to the phylum Arthropoda and like the spiders they belong to the Arachnida but belong to a different order, Scorpiones.

Scorpions are mostly nocturnal and they hunt insects, other arachnids and small reptiles and mammals. During the day they can be found under rocks, bark, ungulate-pats and rock crevices. Often they are attracted to insect activity around lights. Many people leave lights on during the night and these attract insects that in turn attract the scorpions. Scorpions also inhabit thatch roofs, ala Ingwelala!

When aggravated, scorpions seem to make a hissing sound. This sound is produced differently by differently scorpions. One species scrapes its sting along a granulated area on the upper surface of the first two segments of the tail while another vibrates its pincers together.

Scorpions either ambush unsuspecting prey that wanders close to their retreats, or they wander about actively hunting for prey. They detect prey by air movement over the trichobothria (long sensory setae) and when the tarsal sense organs detect the prey, within about 150 mm. This induces a dash to capture the prey. The prey is caught with the chelae (also pincers). Buthids, the thick tail scorpions, have strong venom and small chelae so they sting almost instantly killing their prey and therefore do not require large chelae to hold onto prey. Other, non Buthid species, the thin tail scorpions, have weak venoms but have large powerful chelae that enable them to either secure the prey until it dies from the sting, or to simply crush the prey. The prey is orientated specifically and is eaten head first. Scorpions do not eat every day and even if conditions are ideal, that is warm, windless nights, only a small percentage will feed. Some scorpions can survive 6 to 12 months without food. Prey includes insects, centipedes, millipedes, snails, spiders, soifugids, other scorpions and even small reptiles and mice.

In most species (not all) the male initiates the courting. He grips the female pedipalps (chelae) and leads her in a mating dance that usually lasts about 30 to 60 minutes, but can vary from 5 minutes to 2 days and they can cover a distance of about 25 metres. Once a suitable substrate is found, the male deposits a spermatophore from his genital aperture and the female is then guided over the spermatophore that is taken up into her genital opercula. The sperm uptake lasts from a few seconds to 6 minutes.

Scorpions are viviparous (carry the eggs inside the reproductive tract and give birth to live young). After a 3 to 18 month gestation period, 1-105 live young are born, the average numbering approximately 26. The female, in most species, forms a basket with her first or first and second pairs of legs to catch the newborn at birth. They then climb up her legs onto her back where they will moult for the first time. The birthing rate varies from 1 per minute to 1 per hour and can continue from 12 hours to 10 days depending on the species. The young disperse after 3 to 14 days before they become a meal for their own mother. Food supply and temperature seems to influence the litter size and gestation period and the latter can double in cold conditions. Embryos are reabsorbed if there is a lack of food.

Scorpions moult 6 times before maturity and that varies from 6 months to 8 years. Their life expectancy varies with the different species and ranges from 2 years to as much as 10 to 25 years.

How to prevent being stung by a scorpion

Signs and symptoms of scorpionism

The severity of envenomation depends on various factors such as the health and age of the victim, the sting site and species, size and degree of agitation of the scorpion. A person with heart or respiratory problems will be at greater risk. Some or all of the following signs and symptoms may result:

Dangerous scorpions: how to identify them 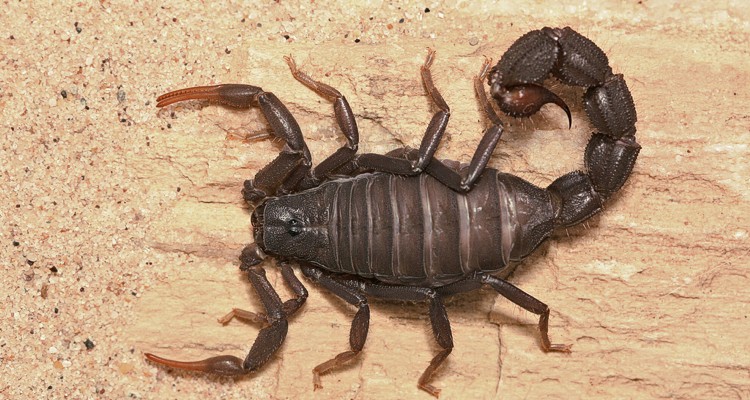 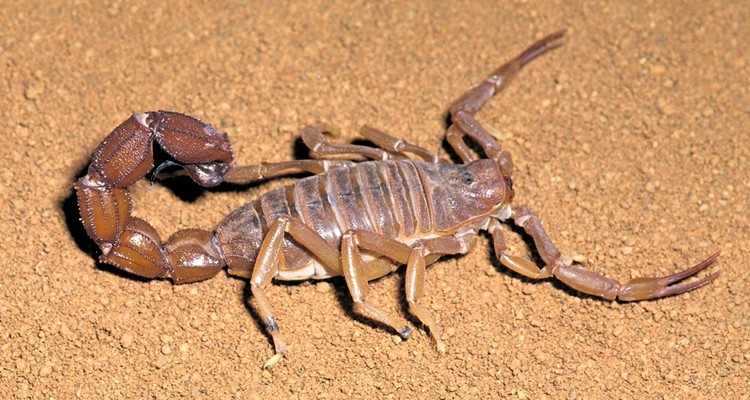 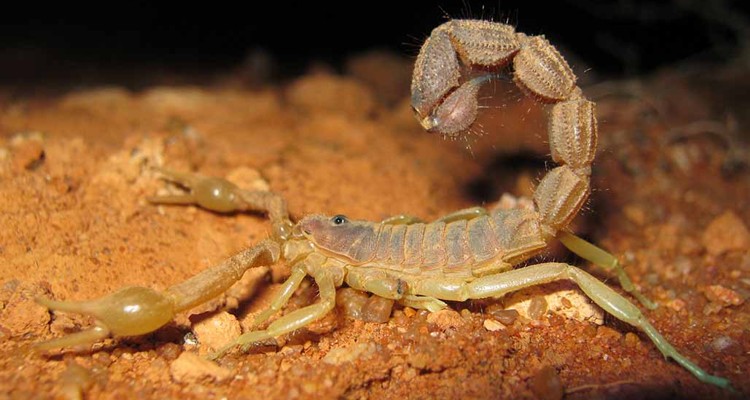 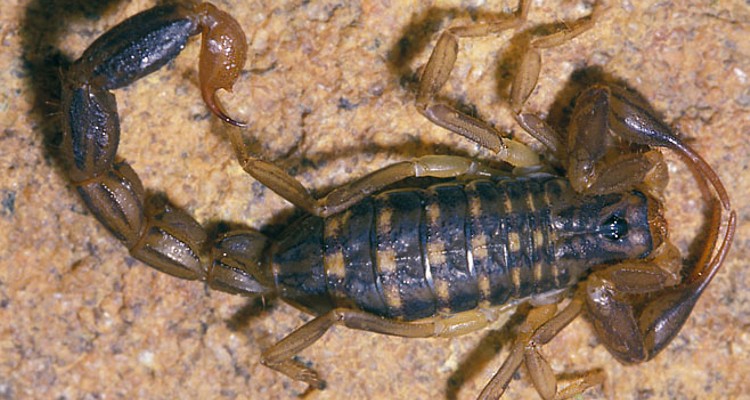 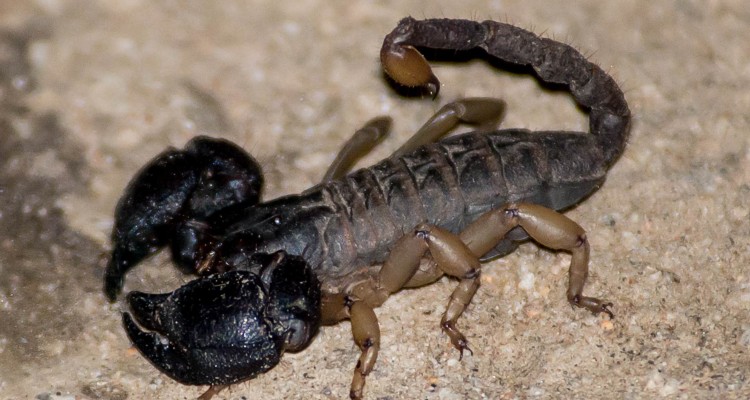 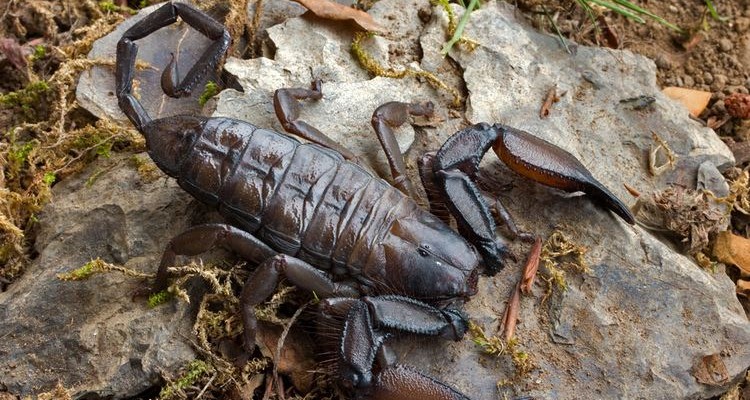 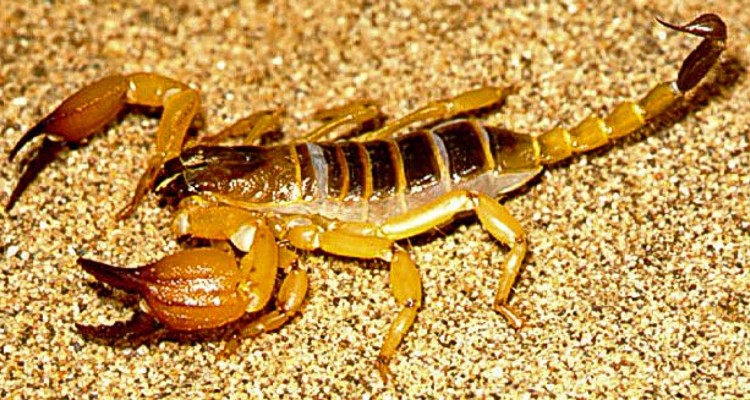 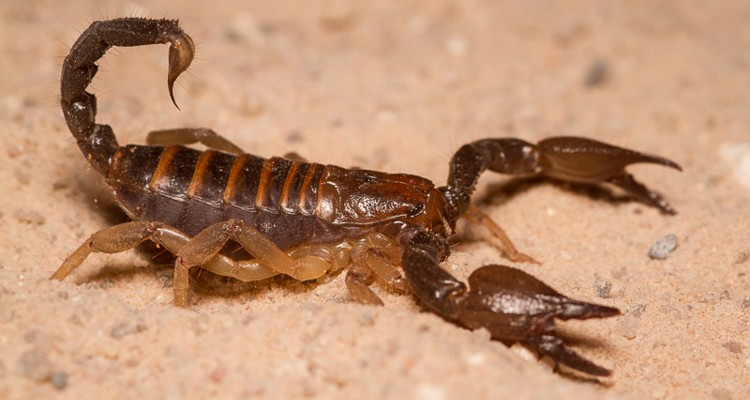 In southern Africa, 20 species of Parabuthus are distributed throughout the sub region, predominantly diverse in the arid and semi-arid regions.

These large scorpions are the most venomous scorpions in southern Africa. Lengths range from 70mm to 180mm. Their distribution is influenced by rainfall, generally occurring in areas receiving less than 600mm of annual rainfall. Most species inhabit sandy regions.

All members of this genus except P. distridor have rough areas on the upper surface of the first tail segment. In many species the second tail segment is also characterised by a second rough area on its upper surface. These scorpions scrape their sting on these rough areas, thus producing a ‘chick-chick’ sound. Their tails are extremely thick, strong with keels. Their pincers are smooth and weak. Many species are able to produce large amounts of venom from their large venom glands.