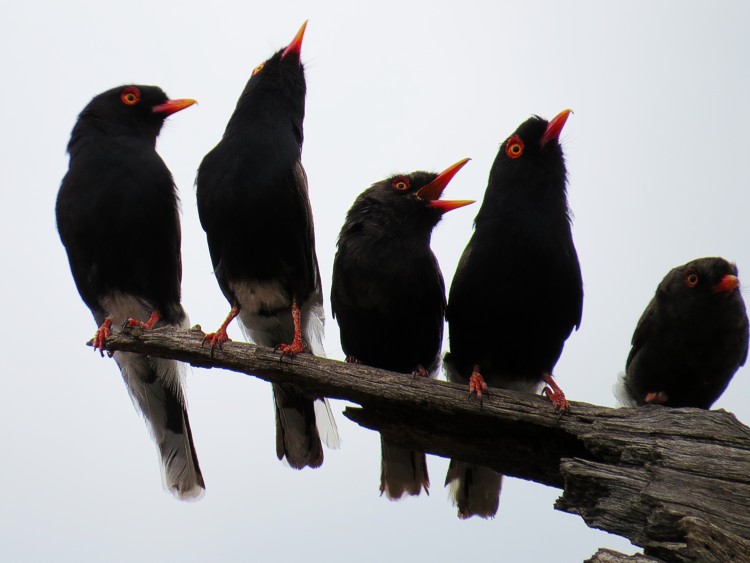 The red eye wattles, red legs and red beak against a black background are unmistakable diagnostic features. They are not easily misidentified with other similar sized birds. Previously they were called Redbilled Helmet-Shrikes if referencing them in an older bird book. There is limited information available on Retz’s Helmet-Shrike.

Despite being resident birds at Ingwelala, they are not too common. Retz’s Helmet-Shrikes are gregarious by nature and move around in small flocks. At this time of the year they are preparing to nest and much of their time is spent gathering nest material and nest construction. Observing them closely reveals that certain hierarchy status occur in their groups as there is much displaying taking place during their rest periods from material collection and feeding. At this time some of the displays are courtship driven.

Nest building is shared between the flock, each contributing to produce a shallow rounded cup shape nest. Incubation duties are also shared, lasting around 20 days. Young chicks rely on the group for feeding.

The diet of these Helmet-Shrikes is mainly insects, moths, butterflies and small invertebrates, predominantly hunted in trees and shrubs. Ground feeding is not common.

Vocalisation is confident and chatty in their family groups.

Conservation status is stable in that existing populations are not immediately threatened or vulnerable, despite suggestions of a decreasing population trend.