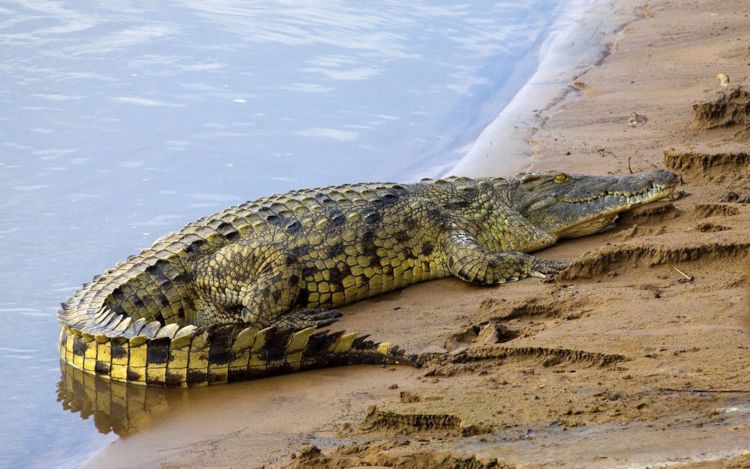 The abundant surface water has resulted in Nile crocodiles (Crocodylus niloticus) popping up all over. From the Class; Reptilia, Nile crocodiles are fairly widespread through central, western and southern Africa and also occur in the western parts of Madagascar.

Skin colouration can vary according to habitat. Eye pigmentation is green. There are usually between 64 – 68 teeth in the mouth. Adult males can grow up to 6 metres in length, but mostly average about five metres. Longevity is thought to be 70 to100 years.

Nile crocodiles are known man-eaters, also feeding opportunistically on domestic live stock, but under natural conditions will feed on aquatic invertebrates, as well as larger vertebrates such as fish, reptiles and mammals. Crocodiles are more social than expected, and may even hunt together in search of large prey. When large prey is caught the crocodiles feed simultaneously off the carcass and use a spinning/rolling motion to dislodge limbs and large chunks of flesh.

Both sexes are territorial and guard this space even more so during the breeding seasons. Mating occurs in water, where after the female lays a clutch of about 50 eggs in soft sand on the river bank. The female will fiercely guard the nest site for 3 months whilst the eggs develop. On hatching the young vocalize a “squeaking” sound which alerts the female to dig open the nest. Hatchlings are carried in the female’s mouth for release in water where she further safe guards them for a considerable period. Females may combine their parenting attentions by forming a creche for the juveniles.

Crocodiles are cold blooded and rely on the sun for thermo regulation. The skin (a sought after hide product) is waterproof and prevents dehydration and salt loss. Their form has changed little over the past 65 million years. They have a range of vocal sounds.

A dozen interesting facts about a crocodile: