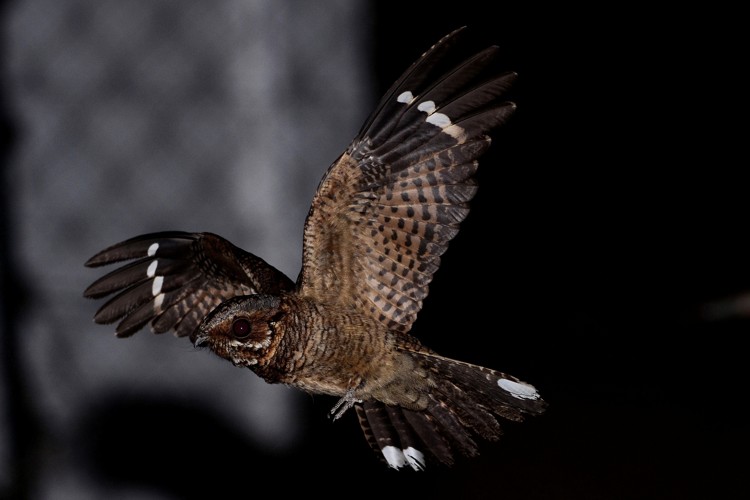 A very special time in the bushveld occurs during the full moon phase. This is even more so during the warm summer months when one can comfortably sit outside on warm balmy evenings, bathed in glorious moonlight, and absorb the wonders of our natural world.

It is at this time that the ever present and humble Fiery-necked Nightjar (Caprimulgus pectoralis) drums out its distinctive and characteristic call described by birders as “good Lord deliver us”. The call is particularly audible through the full moon phase, less so on darker nights.

Many of you will have encountered the Fiery-necked Nightjar on your evening game drives. It is the most common Nightjar on Ingwelala, about 23cms in size, and is nocturnal by habit, feeding on insects which fly about after dark. Although this Nightjar may chose to hunt its dinner from arboreal posts, it is very often found sitting on road surfaces. They are often blinded by oncoming vehicle headlights, “sitting tight” until the very last second, before flying off in a disorientated manner. They are very well camouflaged. No wonder we unfortunately see so many of them succumb as road kills.

The Fiery-necked Nightjar was first described by Cuvier around 1816. Other common names for this bird are South African Nightjar, Pectoral Nightjar, Cuvier’s Nightjar and African Dusky Nightjar. In Afrikaans, it is called Afrikaanse naguil. Fiery-necked Nightjars have a very large range, estimated at over 4 500 000 square kilometers, and therefore exceeds the thresholds for vulnerable range sizes. Its population is considered to be stable. It occurs widely in Africa, ranging from South Africa as far north as Kenya. It enjoys the lower elevations in southern Africa and is scarce in the dry regions.

Breeding occurs during the months from August to January, the hens laying their eggs on bare ground. Both sexes take turn to incubate the eggs (18 days) and look after the chicks. The chicks are able to fly when they are about 18 to 20 days old. Fiery-necked Nightjars are monogamous and mate for life. Both sexes have almost similar plumage.