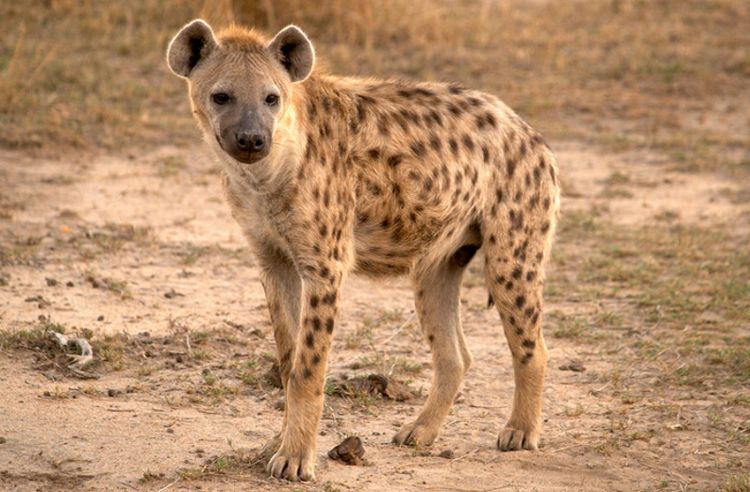 The following text is an account from a Member who came face to face with a hyena in camp early one morning.

After reading your warnings with regards to hyena behavior in the newsletter during our visit the weekend 03.06.2012, I feel I should report and occurrence that happened at 04.h00 on Monday 04.06.2012.

As is our normal behavior we get up early, whereupon I clean up outside the bungalow whilst the rest of the family attends to the inside.

I first cleaned out the braai and the fire pit and then moved the chairs into the bungalow. I returned outside and was busy turning the plastic table upside down to move its legs when a large hyena (I presume female because of size) walked passed on the other side of the retaining wall, (half meter high). I noticed her lips were drawn back and teeth exposed which I found unusual. As she was only 2 -3 m away I clapped my hands and told her to keep going, which she duly did. However, a minute later she appeared diagonally opposite at the braai. She came over the retaining wall and straight towards me. I had removed a plastic leg from the table and so was able to wave it in front of her whist shouting at her. This unfortunately only resulted in her head going down and tail up, and then she come straight for my ankles. I whacked her on the head with the plastic leg whilst retreating to and opening and closing the patio door behind me. Had I not had the plastic leg in my hand, she would have had easy access to me.

With 10-20 seconds of my getting inside the bungalow, two smaller hyenas arrived and proceeded to assault her viciously outside the patio door and up against the retaining wall. This went on for +- 15 minutes where she screamed continually. We managed to video some of this from inside the bungalow door. The hyena stayed locked onto her ear whilst the other one attached other parts of her body which is normal behavior of a hyena. After about 15 minutes the attack stopped when three more hyenas arrived and she managed to make her escape.

Once they had all disappeared we inspected the area, blood and tufts of fur all over, and the smell was awful.

One theory put forward is that she may have been an ousted matriarch due to her physical size, and the fact that her teeth were drawn when she initially passed me was due to fear of the other hyena’s. We have experienced hyenas in the past on probably every occasion we have been coming to Ingwelala for 22 years, a usual clapping of the hands or a movement sends them on their way. They have never been fed at our bungalow, we don’t even allow bones to be thrown into the fire, but rather taken inside and binned accordingly. I thought I would bring this to your attention only as a reminder to members that they are predators and can be unpredictable like all wild animals”.

This is an extremely enlightening experience that undoubtedly provides much food for thought? The closing point that hyenas are top predators cannot be understated.