The Southern Ground-Hornbill Bucorvus leadbeateri is a conservation icon of South Africas savannas. Once widespread and fairly common, a recent analysis of the species status in South Africa has revealed that both its range and numbers decreased by approximately two-thirds during the 20th Century. Because it is such a long-lived and slow-reproducing bird, this represents a decrease of approximately 22% per generation. On this basis alone, IUCN criteria require that its national conservation listing should be elevated to Critically Endangered. The Ground-Hornbill Research and Conservation Project is based at the Association of Private Nature Reserves (APNR), an area of 180 000 hectares adjacent to the Kruger National Park, South Africa.

On the 180 000 ha APNR, there are only approximately 30 resident groups: this translates to 30 potential breeding pairs (because only one pair in each group breeds), or 1 pair/60 km2.

Interestingly, a large proportion of successful breeding attempt in the APNR are made in artificial nests, implying that a shortage of nest sites may be contributing to low breeding success. These birds are tree-nesters, reliant on the availability of natural cavities in large trees.

The Percy FitzPatrick Institute has been monitoring group distribution, composition and breeding performance at the APNR since the breeding season of 2001/2002.

Put in a nutshell, ground-hornbills do things very slowly. They are long-lived and reproduce slowly. Because they also occur at low densities, and pairs do not breed every year, it takes a long time to generate sufficient data to provide any hope of explaining the causes of differences in breeding performance between groups (because extensive data are required to prove that these differences do indeed exist). From a conservation perspective, however, this is the holy grail: if researchers can explain why some groups perform better than others, and can relate these differences to habitat variables, then it may be possible to introduce adaptive habitat management which will benefit the birds.

The use of the satellite tracking devices will allow researchers to address the following questions: 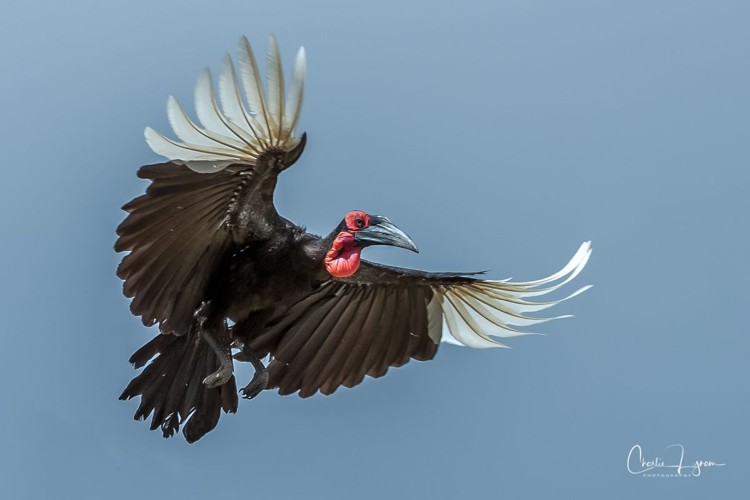 Yes, they can fly!