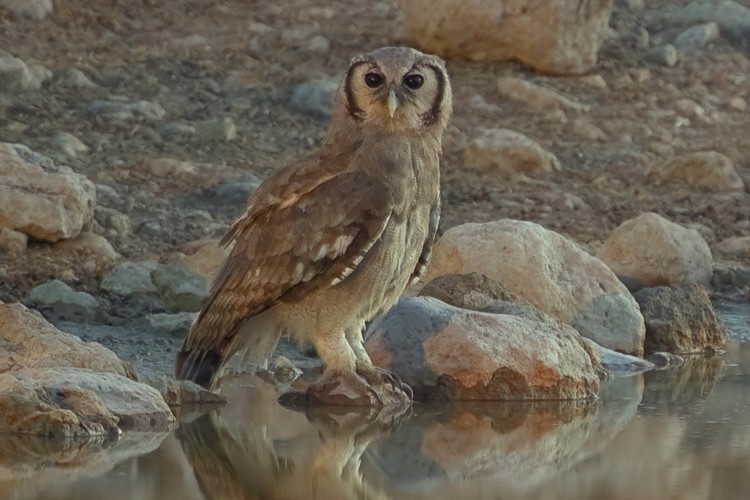 Most mornings in camp, at precious dawn, if you listen very carefully and are able to shut out the rhythmic sound of your partner’s sleepy breathing, you can hear the distinct call of Verreaux's Eagle-Owl.

Formerly known as the Giant Eagle-Owl (Bubo lacteus), its call is an unmistakable sequence of initial deep single nasal like “woks” followed by a number of these strung together. The pitch is fairly consistent, with little, if any range. The male pitch has more bass than the female. It can call from a steady perch, usually concealed, for lengthy periods.

This owl is large, and globally the third heaviest owl when weighed on a scale. It can grow to over two feet in length. Its wingspan is also impressive, some specimens having a span of up to 2.0 metres. In Africa it is the largest owl. Its range in Sub-Saharan Africa excludes the Namib Desert and tropical rainforests. Apart from its large size, an easy identifiable feature is its white face and noticeable pink eyelids when it blinks. The ears have distinct ear tufts.

Verreaux’s Eagle-Owl breeds from March to September. Incubation for the two eggs laid is approximately 38 days. Only the female incubates the eggs, while the male executes all hunter gatherer duties, sufficient to feed the both of them. The hunting duties continue after the eggs hatch, his family alerting him to their dietary needs by making high pitched calls, asking to be fed. The eggs hatch apart, and in times of leanness it is only the first hatched that is cared for. If times are plentiful and both chicks survive they may occupy the nest for as long as three months. Self feeding commences at about five months. Breeding pairs are monogamous and a territory is defended. Sexual maturity is between three to four years. Nest sites are often the disused stick nest types of other birds such as Hammerkops and vultures.

On Ingwelala I have seen Verreaux’s Eagle-Owl nesting in the taller trees with larger canopies along the eastern side of the Nhlaralumi River between Farmhouse and Timbavati Crossings. This is a nocturnal owl; I mention this fact as not all owls on Ingwelala are nocturnal, for example the Pearl-spotted Owlet (Glaucidium perlatum) which is mostly active and audible during the day.

Verreaux’s Eagle-Owl enjoys a mixed bag of food, on Ingwelala hunting genets, hares, small monkeys, squirrels, bats, rats, birds and mice. They are formidable and powerful hunters, catching a wide range of birds and bird sizes, even killing other raptors’ nestlings. Reptiles, insects and even fish are also part of the mixed bag. Large prey too heavy to lift may be shared on the ground between two adult birds.

Other interesting facts about owls: