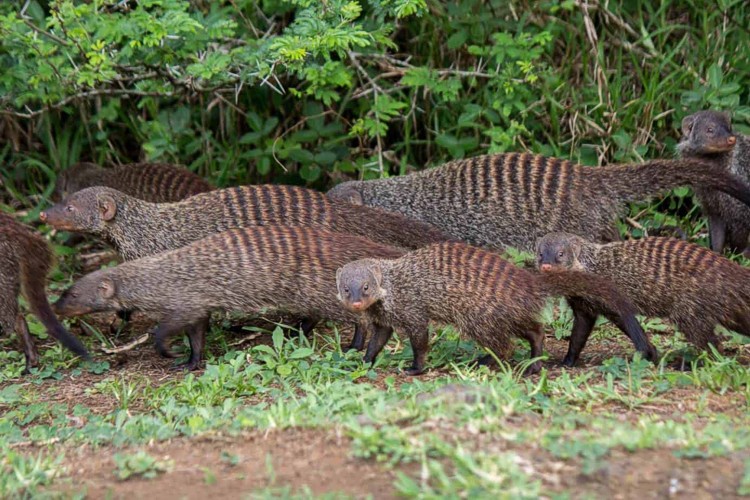 These banded mongooses (Mungos mungo) have really cashed in on a protein supply of freshwater mussels, located in stagnant water pools along the Nhlaralumi River. The feeding behaviour and skill set of the mongooses is fascinating and the biology of the freshwater mussel is intriguing.

The feeding behaviour of the mongooses is extremely interesting whereby they are extremely comfortable in the water of shallow pools and they use a hard surface (in this case a patio wall) to break open the mussel shell.

This points towards using a tool to get the job done. The noise produced as they vigorously smash mussels against the hard surface certainly attracts attention! The front limbs and paws are used to throw the mussel between the back legs.

The following pictures tell a story:

A banded mongoose in search of a mussel 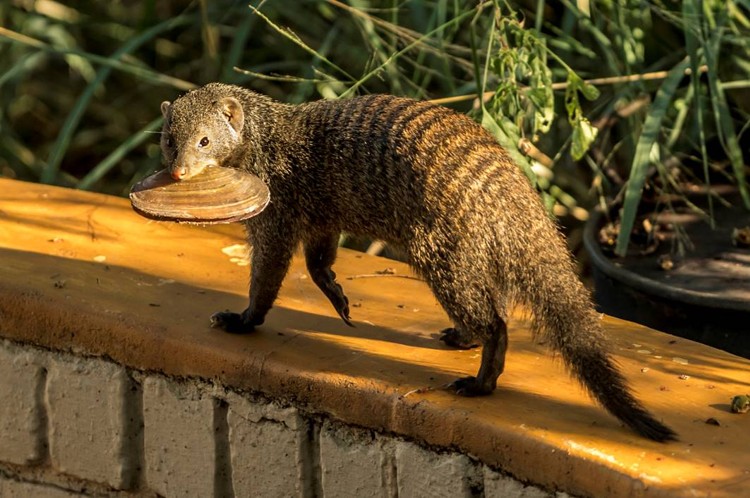 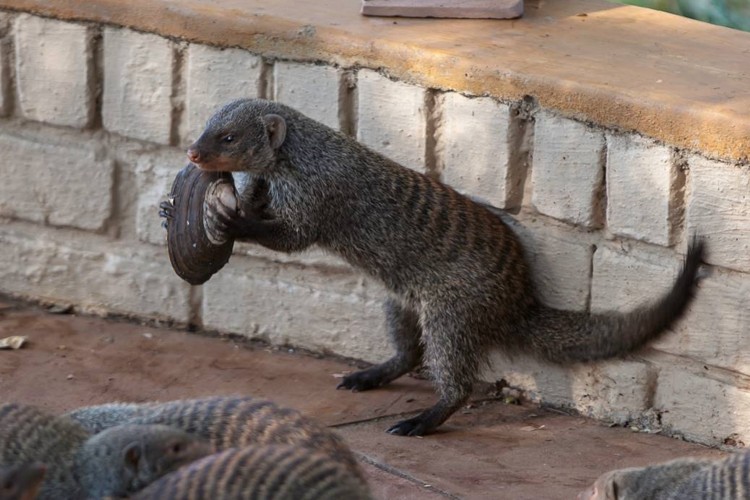 Preparing for action to break open the mussel 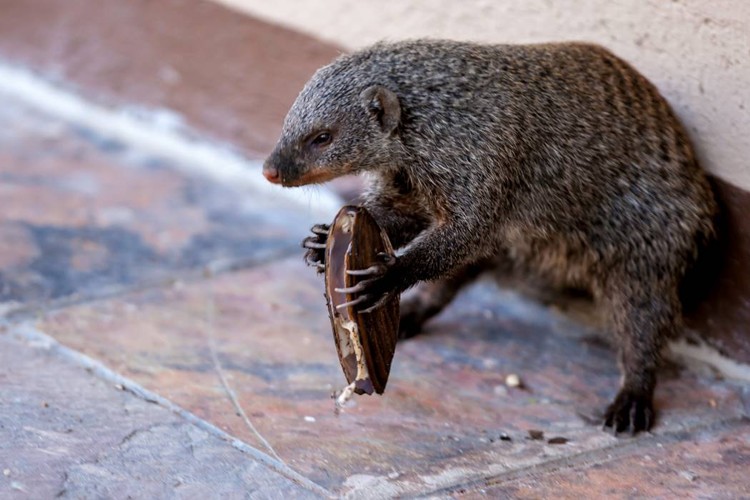 Smashing the mussel against the wall, note the long hard claws

Banded mongooses also feed on eggs of reptiles and ground nesting birds, again, throwing the eggs rearwards with their front paws to break them. Front and hind paws each have five toes, the claws are long and robust, used for digging in the soil to find invertebrates such as termites and beetles. Ground birds, frogs, and small reptiles form part of the diet plan. Mongooses have a keen sense of smell which assists locating prey items.

Banded mongooses are diurnal and social animals, living in groups that average 20 individuals. Abandoned termite mounds are used as underground  to sleep in at night. Whilst aggression levels remain low between intra group individuals, inter group aggression is high, sometimes ending in mortalities. Scent marking is used to establish territories.

The life and biology of the freshwater mussel deserves special mention.

Of special interest to me is an observation made by one of the original Ingwelala Members’ who informed me that historically these fresh water muscles were restricted to the area near to what we call Timbavati Crossing, in the water pools that formed there from the leaking dam wall a short distance upstream. Mussels use a body part known as a foot to migrate which takes place subsurface. This demonstrates an important ecological point that, post the dam wall failing in the 2012 flood, the significant health improvement of this aquatic system due to a higher water table in the current open system. The mussels have increased their range due to a higher water table because of fewer river impoundments.

Mussels are bivalves which filter feed, removing microorganisms, detritus and bacteria from the water. Their purpose is to clean the water and contribute to a healthy river system. The nature of their filter feeding makes mussels particularly vulnerable to pollutants and siltation. The conservation of mussels is therefore vital to prevent the degradation of river systems, which are under increasing pressure to sustain themselves.

Like trees, mussels have growth lines, these lines appear on the exterior of their shells, providing evidence they are long living invertebrates, typically between 10–50 years, some species live to 100 years!

Glochidia is the scientific term given to mussel larvae. Mussels use fish as hosts to grow their larvae. The glochidia are released onto the fish when lured closely by the mussel, the glochidia attach to the fins and gills of the fish where they develop into juveniles, eventually abandoning their host, sinking to the riverbed. By using fish as hosts, mussels invented a way to migrate upstream, they are incapable of moving upstream on their own!

In this way barriers such as dam walls, especially those with no fish ladders, prevent fish migrating upstream and this in turn impacts on mussel populations and general water quality.

Mussels are important in the food chain as they are preyed on by fish, mammals, birds and reptiles. Empty shells are used by small fish as nesting sites.