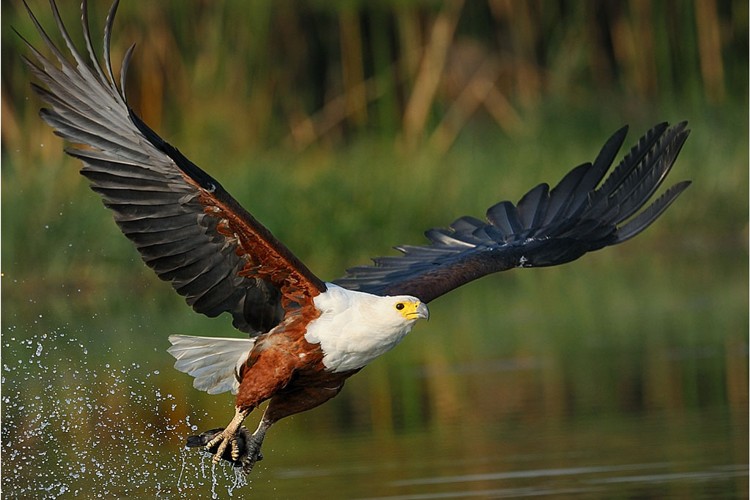 It is a very special moment each morning to be woken by the call of the African Fish Eagle (Haliaeetus vocifer), especially given the fact that at this time of the year the Ingwelala water courses are usually bone dry.

The residual pools in the Nhlaralumi have much to offer the resident wildlife. The call of the African Fish Eagle is very distinctive, a synonymous sound with the African landscape. It cannot be confused with any other call from our local feathered friends. Such is its endearment and appeal to mankind that I have occasionally faultered in shopping malls for a brief second only to identify the origin of this call from the adjacent cell phone user. Yes, you can down load its call as your preferred ring tone. The Kingfisher ring tones are also easy listening.

The appearance of a mature Fish Eagle is also distinct; its colouration not allowing it to be confused with another species, even a novice bird watcher can tick the check list with absolute confidence. They are usually seen in pairs, thought to mate for life, the female can be told apart from the male as she is the larger and has a larger white breast patch. Their breeding season occurs during the drier months. A nest is constructed from dry twigs, mostly build in the fork of a tree, but can also be on a rocky ledge and always close to water. Between 1 and 3 eggs are laid. Juvenile Fish Eagles may take as long as five years to achieve full adult plumage.

Diet preference for Fish Eagles (no surprises) is fish. An important hunting aspect for Fish Eagles is the size of the catch. Smaller fry with a mass of less than 2kgs are plucked from the water with specially adapted powerful talons (adaptations called “spiricules” found on the toes), ideal for catching slippery prey, and air lifted to a nearby tree for feeding on. Fish weighing between 2 and 3 kgs are either planed along the water surface to the nearest shore or swum ashore as Fish Eagles are able to do a butterfly type stroke using their wings as paddles. These larger prey items are eaten on the ground. Established pairs share their meals with each other.

The conservation status of Fish Eagles is categorized as “Least Concern” by IUCN. Fish Eagles are represented in reasonably large numbers sub-Saharan. They are adaptable and enjoy a range of habitats from open water bodies in grasslands to rivers, swamps, marshes and even estuaries.