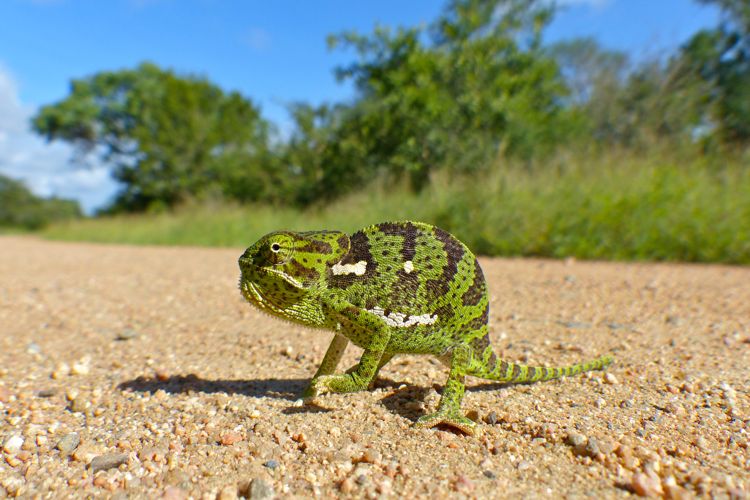 A common pedestrian seen crossing the reserve roads these days, is the flap-necked chameleon, Chamaeleo dilepis.

They are currently abundant, their only misfortune as a population being the numbers that have been prejudiced by road kills.

The flap-necked chameleon is one of the larger chameleons that occur in South Africa, growing up to a maximum length of about 35 cms. Its range in RSA is in the central north and north eastern parts of our country.

An interesting and diagnostic characteristic of the flap-neck chameleon are the occipital skin flaps behind the head. These skin flaps are larger and more prominent in the western sector of the population. Flap size varies and is dependant on age and sex, adult males having the largest flaps. It is these skin flaps that derive its name. The tail is long and prehensile, equal in length to its body, aiding in good balance and climbing stability. A further distinguishing feature is a throat crest which has small white scales that extend onto the belly, and the belly crest is white. Its overall colour may vary from green to pale yellow or brown, known to be able to readily change colour, especially when stressed – becoming quite dark in colour. Eyes are typically chameleon like and can be directed independently of each other. Each foot has five toes with a prominent claw on each.

Flap-necked chameleons are mainly insectivorous, feeding on small insects such as flies, grasshoppers and beetles. During prey capture both eyes are directed forwards, creating binocular like vision. The long tongue which is sticky is used to catch prey. Tongue length equals body length when fully extended.

When threatened its body language is characterised by a gaping mouth which displays an orange colour lining. Simultaneously it raises the occipital flaps, inflates its body and rocks from side to side. It is reported to bite readily, though the bite carries no poison or venom. Hissing also occurs. It is predated on by large birds, monkeys and snakes.

The flap-neck chameleon is relatively easy to spot with a strong light at night whilst it is sleeping, as its body colour becomes a pale whitish green and this shows up rather easily. They also change colour to regulate body temperature, for example darkening the body to absorb more solar radiation. The shadow side remains paler.

During the cooler winter months flap-neck chameleons are more difficult to find as they become less active. It is unconfirmed, but in the much colder areas it is suggested they may hibernate, in underground tunnels. This may also serve as protection from grassland fires.

Gender identification is easy as the males have a distinct swelling at the base of their tails. On each hind foot the males have a small backward projecting spur. Mating season is in late spring – early summer when the male’s gular skin turns pale-white. Male rivalry is known and there is a further interstitial skin display amongst adult males. The females then permit approach from males, but courtship is brief before the actual act of mating takes place which may last up to an hour. For the female, egg development usually takes between 3 to 4 months, during this time the female presents a dull outer colour and is rather aggressive in nature. In late summer the female meticulously excavates a hole in damp soil before she lays her clutch of eggs which can total as many as 60. The hole is then carefully covered up and compacted. Egg incubation lasts from anything between 9 to 12 months, the young hatching and digging themselves out of the nest to reach the surface.