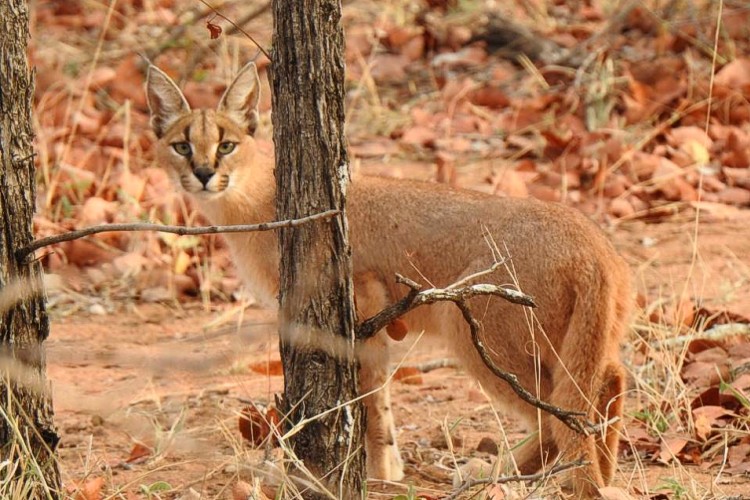 Of special interest in the month of September 2020 were two sightings of caracal (Caracal caracal), in Afrikaans, rooikat, and in Tsonga, nandani. The caracal is not often seen on Ingwelala, the one pictured below is courtesy of Jeanette Gray, taken on Goedehoop.

The caracal is a predator belonging to the cat family, its average shoulder height is 45 centimetres. Males (17 kgs) are much heavier than the females (11 kgs), body colour varies from reddish-brown to a silvery-grey, with the underparts being white. Other diagnostic features are distinct black stripes seen from the eye to the nose and in the centre of the forehead and their ears are black-backed with long black tufts on the ear tips.

Caracal range widely in the Subregion where habitat preference varies from woodlands to rocky hills to plains and thickets. Body colour permits superb camouflage allowing caracals to be sublime hunters. Of a solitary nature, caracals are nocturnal, both sexes defend home ranges.

Prey is mostly warm-blooded, and caracals are formidable bird hunters, their actions are super swift, enabling live birds to be plucked from the air after being flushed from the undergrowth. Mammals preyed on include small antelope, hares, hyraxes and even monkeys.

Caracals relinquish the solitary lifestyle only to mate and raise kittens. Gestation is approximately 78 days when on average two to three kittens are born. Dens are often abandoned aardvark burrows. Caracals are not seasonal breeders, but there is a birth peak during the summer months. Males to not assist raising the kittens.

On the list of Threatened Species, caracal is classified as Least Concern (LC).