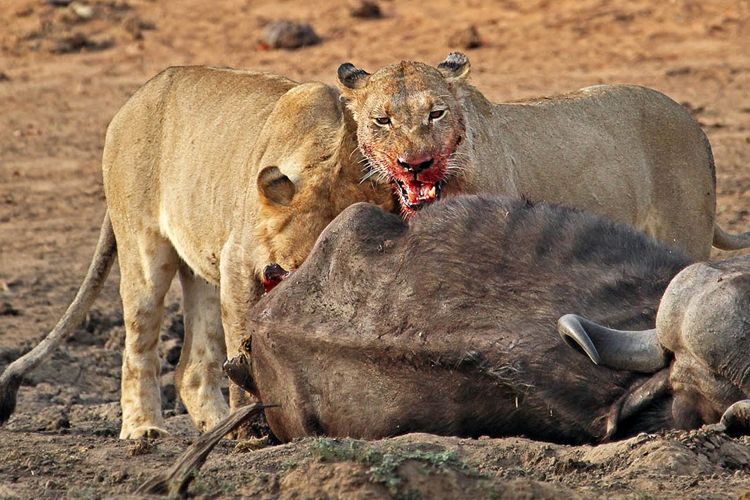 Tuberculosis (TB) is a disease affecting cattle and a variety of wildlife worldwide. It is caused by a bacteria (Mycobacterium bovis) that gains access to the body via the respiratory or alimentary tracts or through the skin.

Depending on the climate the bacteria can survive for days to weeks in the environment. The first reported cases of TB in wildlife in South Africa were in 1928 when the disease was recorded in kudu and common duiker. An isolated case of TB in an impala in the Crocodile Bridge region of the Kruger National Park (KNP) was recorded in 1967.

TB was most likely introduced into the KNP on the southern boundary following intermingling of buffaloes and infected cattle in the 1960s or 1980s but remained undetected until 1990 when it was diagnosed in a 2 year old buffalo bull. Currently >90% of the buffalo herds in the south of Kruger have TB. Buffalo infect each other by the inhalation of infected droplets produced by coughing or sneezing shedders.

When infection progresses to disease, buffaloes gradually become emaciated and anorexic. In advanced cases coughing and breathing with difficulty is seen. In Africa, buffalo are maintenance hosts (carry the disease) and it is suggested that lions and kudu may be additional maintenance hosts.

Buffalo carcasses are the most likely sources of infection in carnivores, particularly lions, which are infected via the gut when feeding on infected carcasses. In the KNP buffaloes constitute about 4% of lion’s total food although this figure may be higher in the Timbavati. Once infected a lion can shed the virus in aerosols and infect other members in the pride due to their highly social nature. Infected lions may show signs of progressive weight loss, poor healing skin wounds, joint swellings, muscle loss and eye lesions.

TB in lions contributes to lower lion survival and breeding success. Increased cub death due to faster territorial male turnover is occurring. Abnormal sex ratios have been observed and some male and female prides have been evicted from their territories. In the KNP and surrounding areas a progressive northward spread of TB is occurring. In areas with high buffalo herd TB prevalence, up to 90% of the lions in the corresponding areas are infected.

Vaccination is the control measure of choice but an effective wildlife vaccine does not currently exist. In the KNP and surrounding private reserves it is hoped that buffalo and lions will adapt to TB through natural selection of more resistant individuals although this may take generations.

JL: On behalf of the Membership, thank you Dr Dittberner, for this very informative text, appreciated by all.