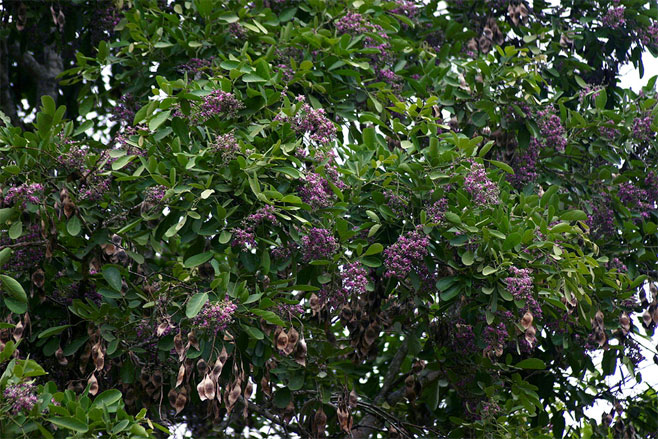 A beautiful image in the landscape at this time of the year is the prolific flowering of the tree Philenoptera violacea, formerly known as Lonchocarpus capassa.

As South Africans I think it is fair to say that we know the tree as the Appelblaar and that this Afrikaans name is far more referenced than the English Apple-leaf? Zulu linguists call it isiHomohomo and other indigenous African names are umPhanda and umBhandu. The scientific name, however, is derived from the Greek word “philenos” meaning tractable or manageable and “pteros” meaning wing whereby the wing makes the pod “manageable” for dispersal. The Latin word for violet is “violacea” which describes the colour of the flowers, hence Philenoptera violacea.

At this time of the year, October through to November, the Appelblaar flowers, a magnificent show of rather small sized purple-mauve petals with tiny grey hairs covering the buds. The dense mass of flowers is conspicuous because they are terminal and populate the hanging end branchlets, creating an almost pendant like impression. The flowers are sweet-scented. The nectar attracts volumes of bees, butterflies, other insects and birds.

The Appelblaar is a protected tree in South Africa. The genus Philenoptera supports a variety of 12 species (three occurring in SA) which enjoy a reasonably wide distribution through Southern Africa, including the tropics and occurring as far east as Madagascar. It is frost sensitive and drought resistant. It is adaptable in that it can grow in many different soil types. Maximum height for this deciduous tree is about 18 metres for the larger specimens that usually occur along water courses and drainage lines.

The leaves are eaten by most browsers, especially by elephants and giraffes. No wonder these trees sometimes have the most fascinating shapes as they contend with browsing pressure, fire pressure in the savanna ecology and insect damage too! Due to this Appelblaars demonstrate what we term “character” and are often the image subject of keen eyed photographers. Other uses to man is that the wood is used for traditional mealie stampers, crafting of ornaments and mokoros (dugout canoes). Medicinally it may cure diarrhea, gastro challenges, colds, snakebites and deworming.

The Appelblaar is also known as the “rain tree” for at certain times of the year spittle bugs (Ptyelus grossus) inhabits the tree, feeding on the sap, and the moisture overflow from the stems and branches creates an impression that there is a light drizzle. Check the skies to ascertain if the weather man is leading you on?! The tree uses this unusual generated moisture to survive drought conditions, almost “self watering” itself in a manner of speaking. Some references suggest part of the moisture is also the spittle bug excrete so be warned!

The Appelblaar makes for a great ornamental tree in garden landscapes. If this is of interest to you, you can try growing it from seed, which requires an initial 24 hour soaking in hot water before planting in a seed tray using sandy soil. You should see germination after a week or so and for a further month protect the seedlings from direct sunlight. Remember that Appelblaars are frost sensitive.

Facts researched from the internet and Field Guide to the Trees of the Kruger National Park:(P van Wyk: Fifth edition: 2008). Text by John Llewellyn.