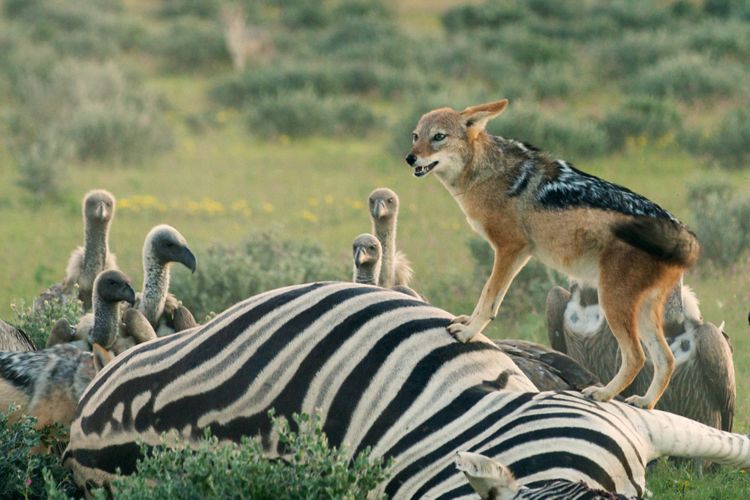 Anthrax has a worldwide distribution and is caused by a bacterium (Bacillus anthracis) resulting in a non-contagious disease that can affect wildlife, domestic animals and humans.

Anthrax is the only disease in the KNP and its surrounds that kills its host in order to survive. Species susceptibility to anthrax varies with herbivores (primary hosts) being more susceptible than carnivores (secondary or spill over hosts).

Towards the end of dry seasons, crowding occurs around waterholes and remaining green patches, and micronutrients are lacking in diets. This causes a loss of physical condition, and the resulting stress decreases immunity, rendering an animal prone to disease.

Herbivores are infected following ingestion of a sufficient number of spores, which germinate and enter the animal’s tissues through abrasions in the pharynx or lower gastrointestinal tract. These abrasions are a result of grazing on tough, ‘scratchy’ textured forage in dry periods. Once in the host animal’s tissues the bacteria make their way into the bloodstream, causing a septicaemia, resulting in rapid death of the host. Clotting is inhibited by the terminal septicaemia, and bacteria rich blood oozes from the orifices of dead animals. Once in contact with oxygen the bacteria form spores that ensure the survival of the organism in the environment for 60-200 years.

Predators and scavengers play a role in dissemination of bacteria and spores by opening carcasses, dragging around portions of meat and ingesting spores which are later widely distributed in their faeces. Vultures that have fed on carcasses visit watering holes and contaminate the water by defecating in it or by washing their bodies. Vultures may however, help in curtailing the disease by disposing of carcasses.

Blowflies play an important role in the spreading of spores. They feed on opened and unopened carcasses, and when disturbed, fly to nearby vegetation. Here they deposit faecal or oral droplets containing high numbers of bacteria and spores. These droplets are typically deposited on vegetation at one to three meters above ground level and this coincides with the height at which kudu feed.

This may be the reason for the high incidence of disease in kudu. Water and soil are mechanical carrier media. Spores are found in the upper few centimeters of soil and in the sediment of water catchment areas. These areas serve as sources for later anthrax outbreaks or epidemics.

References or more information on request
JL: Thanks Dr Dittberner, for a very enlightening article.