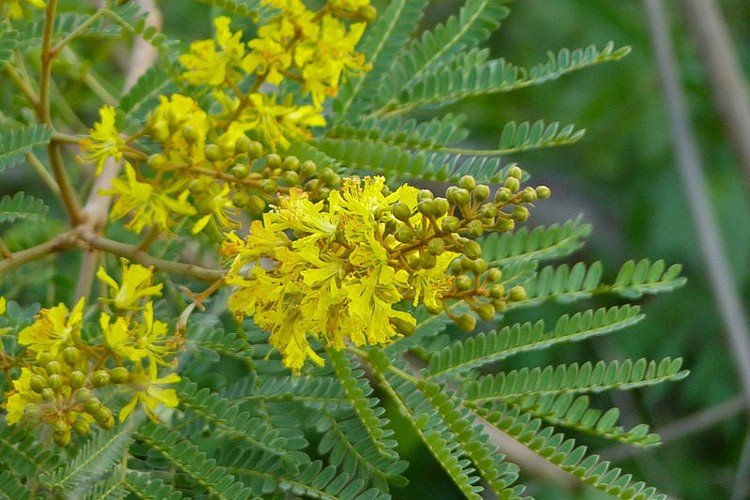 Through November, the African wattle (Peltophorum africanum) was an endearing feature in the landscape.

It is a fairly common tree on Ingwelala and this season their collective and simultaneous flowering delivered a spectacular yellow hue amidst the summer greenery.

Other common names include weeping wattle and in Afrikaans huilboom, huilbos and dopperkiaat. In Shangaan it is called Ndzhenga. The spittle bug (Ptyelus grossus) is known to inhabit this tree in summer and secretions from the bugs create a sense of “rain” lending the tree to occasionally be referred to as a rain tree. It belongs to the family Fabaceae.

The African wattle is classed as a small to medium sized tree, its height reaching up to 10 metres. It is not uncommon to find specimens that are multi stemmed. The leaf growth and canopy can be generously spread, creating plenty of shade in the summer months. This attribute also lends itself to making useful screening in suburban gardens. It is deciduous, losing its leaves during winter. The leaf shape is similar to an Acacia, but the absence of thorns on the wattle should therefore avoid any misidentification. It is geographically wide spread throughout southern Africa, growing at low and medium altitudes.

The flowers are very impressive, a bright yellow that usually occurs in abundance, making it spectacular when in flower in early summer. Pollination is mostly through bees, insects and birds.

Flat pods that characteristically hang in clusters are its fruit base.

At Ingwelala, the newer shoots on the trees are browsed by giraffe, kudu, nyala, impala and elephants. Look out for African wattles along the river courses, especially in the Farmhouse area on Argyle, as well as near any termite mounds. Caterpillars use this tree. In agriculture, livestock feed on the leaves and pods and utilize its shade.

Propagating the African wattle is relatively easy. Fresh seeds should initially be soaked in hot water for several hours before planting in well drained soil. Germination is quick. It is a fast growing tree that is tolerant of drought conditions, but can be vulnerable to frost during its first few years. Young plants transplant well. It is a popular bonsai choice.

Medicinal uses are varied. The Shangaan people traditionally use the roots for several purposes, like preparing a soap wash good for skin, a cure for sore throats after gargling a solution, ground into powder form it helps heal wounds and is an aide for stomach ailments. Colic symptoms can be relieved by chewing small pieces of bark. Inhaling the vapour of boiling leaves can help alleviate toothache.

African wattle can further be used by man to make furniture, carve ornaments, burn as fuel as well as being very useful for bee-keeping as the flowers produce high volumes of pollen and nectar.