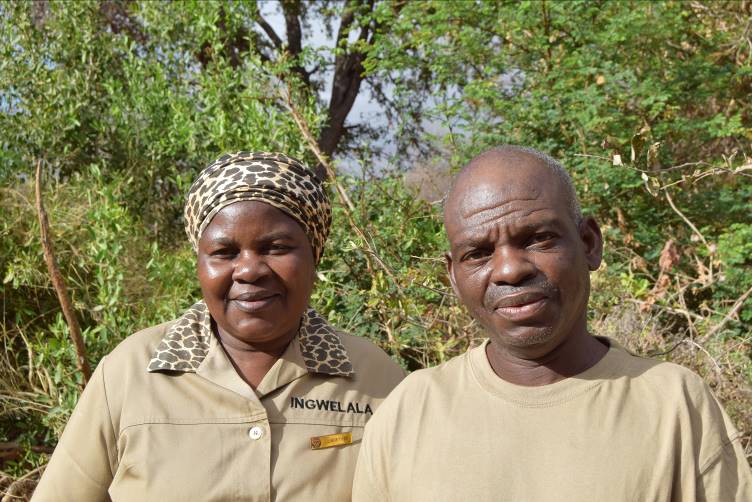 John Sibuyi and Elizabeth Monyane married in 1996. In 1997 John was employed by Ingwelala in the Maintenance Team because of his skill set with brick laying, tiling and carpentry.

Elizabeth joined the Housekeeping Team a year later in 1998.

Both John and Elizabeth grew up in the Mkuhlu area near Mala Mala. They have two children, a 30-year old son, Remission, who is a Primary School Teacher, and a 27-year old daughter, Confidence, who is married and stays home looking after her children.

Elizabeth has two joint favourite animals, leopard and lion, because they attract people from all over the world to come and view them, and they are not easily seen. John finds elephants interesting, because they are the largest and strongest land mammals, and they can be tamed by man. Regarding flora, Elizabeth loves Marula trees as they provide a fantastic fruit for harvesting and conversion into juice, oil, jam and jelly. John prefers a Mopane tree, his observation being that it is a strong, slow growing tree, that seldom suffers storm damage, thereby avoiding damage to buildings and infrastructure.

In terms of working and living at Ingwelala, Elizabeth says she enjoys the environment because it is peaceful and quiet, while John enjoys seeing the Members’ going on their game drives in search of memorable sightings. When asked for their views on areas for improvements, Elizabeth would like to see the concrete causeway raised to a higher level, to allow for safer vehicle passage when the river floods. Being a true maintenance man, John would like to see the main line pipes re-reticulated and modernised, he feels the system is old and is need of an upgrade to avoid spending hours on end repairing main line water leaks.

In their personal time, John and Elizabeth are active church goers, they enjoy watching television, especially sport and football, the Kaiser Chiefs being a firm favourate.