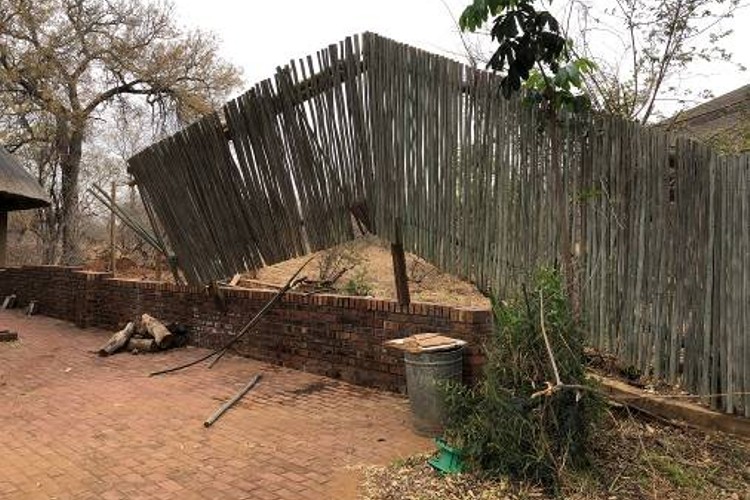 Chris Mayes, our Conservation Manager reports: "The earlier parts of October were relatively incident free with regards elephant incursions and their associated impact within the camp area. This changed dramatically in the latter days of the month.

Multiple breaks of the perimeter fence is again becoming the norm during my morning inspection. As I write this there are five separate breaks from last night that require repair today. This is again putting pressure on the conservation team to effect repairs as our other current projects are been delayed, mostly the completion of the Telkom poles and cable removal along our portion of Argyle Road. The most notable damage was to Bungalow #19 lath fencing and the solar panel installation at Bungalow #145. The elephant responsible for this damage is the same bull reported on in previous months, easily identifiable from his tusk configuration. However, this is not the bull that was translocated to southern Timbavati. He has subsequently been joined by a larger bull with impressive symmetrical and matching ivory, my staff confirm having seen him previously visiting camp.

We have experimented with the trampoline springs on Fence Number #3 which is close to the Airstrip. It remains early days for this trial, but the results are not as successful as we hoped for. The idea is to create more elasticity in the fence, making it difficult for the fence wires to snap instantaneously. In this way the elephant is vulnerable to a longer pulse shock which we hoped would serve as a better deterrent. The Conservation Team will continue to experiment with different options to increase the level of deterrent.

A manual pole driver jig was designed and then welded up by Dave Annandale in the Maintenance Team to assist with Y-standard and earth spike installations. This assists with the earthing grid for the fence. Due to the extreme dry conditions it is critical to improve the earthing characteristics of the electric fence. This is unfortunately on hold as the daily fence repairs are undertaken.

The replacement of the steel wire strands has continued whenever possible. This will now be done in conjunction with the new Y- standard supports as mentioned above."

The Conservation Team is spending an enormous amount of its working hours managing the elephant incursions into camp and the necessary fence repairs that need to be undertaken. In turn, the Maintenance Team is spending a great deal of its time searching for water leaks, infrastructure damage and reporting this damage to the various affected Members. I don’t recall ever seeing such massive piles of opened Job Cards in the Maintenance Office!

It seems never ending, but hopefully with some useful rain and the veld greening up, the elephant pressure may ease up in camp.