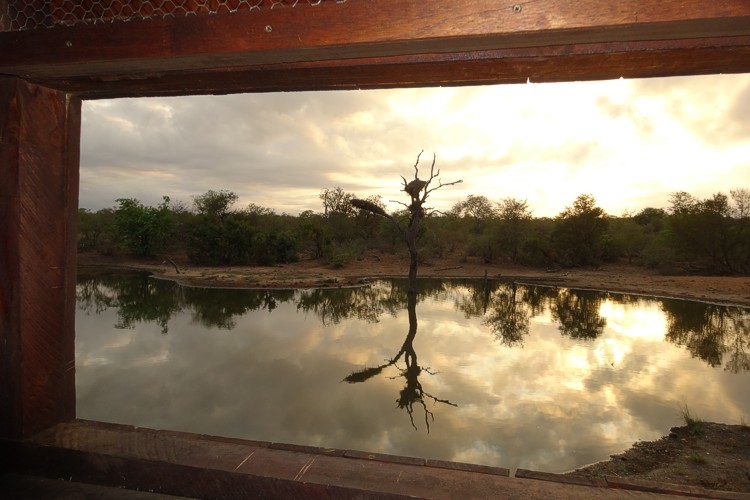 As we bid farewell to 2018 and welcome 2019, on behalf of all the staff I take this opportunity to wish all the Members and their families a prosperous 2019.

I wish to thank the Directors who serve on your Board for their collective input and continued dedication to Ingwelala, for unselfishly giving up so much of their personal time, on a volunteer basis, to make the Reserve the magical place that it is. Thank you to a wonderful team of staff who encourage each other in the work place to keep striving for new challenges and improved results. Thank you to the Membership for your continued support of the Board and Staff.

Reflecting on 2018, from an Ingwelala perspective, it was another busy year, with many more ups than downs. On a micro scale the Reserve was able to complete several projects successfully, and on a macro scale the signing of the long awaited reviewed and renewed Greater Kruger Co-operative Agreement is a massive mile stone for nature conservation and ecology, a historical moment that has plenty to deliver on for sustainable wildlife-based land use going forward. The divided opinions and debates around sustainable trophy hunting in Protected Areas open to National Parks certainly topped social media airtime from the mid-year.

A further three Members Information Evenings hosted guest speakers, specialists in their respective fields of expertise, who shared their working knowledge. Herpetologist, Johan Marias, spoke about snakes and scorpions, putting plenty of myths to bed! David Marneweck, from EWT (Endangered Wildlife Trust) informed us of the EWT Carnivore Conservation Programme he manages, and all the research and monitoring work being undertaken. Michelle Henley from Elephants Alive enlightened us about the field work her team does, and the long-term jumbo projects in hand.

We learned a great deal about elephants during 2018, how the drought conditions drove several elephant bulls into the camp environment. Despite a significant human presence in camp and a high voltage perimeter fence, usually sufficient deterrents for elephants to range elsewhere, the attraction of greener vegetation in camp overrode natural behaviour and these bulls tenaciously and persistently breached the perimeter fences to feed in camp. The Conservation team spent most of its time repairing and replacing fences which impacted negatively on their ability to do other field work such as alien plant eradication, veld rehabilitation and erosion control. Where critical, work was outsourced to lend capacity such as the first follow up treatment to coppice on the Buffelsbed 56-ha trial plot.

One of the elephant bulls in camp would not be evicted! Even when the fences were removed at strategic points to exit, he would arrive where the fence was, and he would not cross the imaginary line! This resulted in a joint operation with Elephants Alive, to immobilise the bull and translocate him elsewhere on a flatbed truck. The operation was a huge success, thank you to Timbavati for agreeing to his release in the southern part of the Timbavati Private Nature Reserve.

Feedback at the time of writing is that he was seen recently, far from Ingwelala, close to a breeding herd. His condition is excellent. 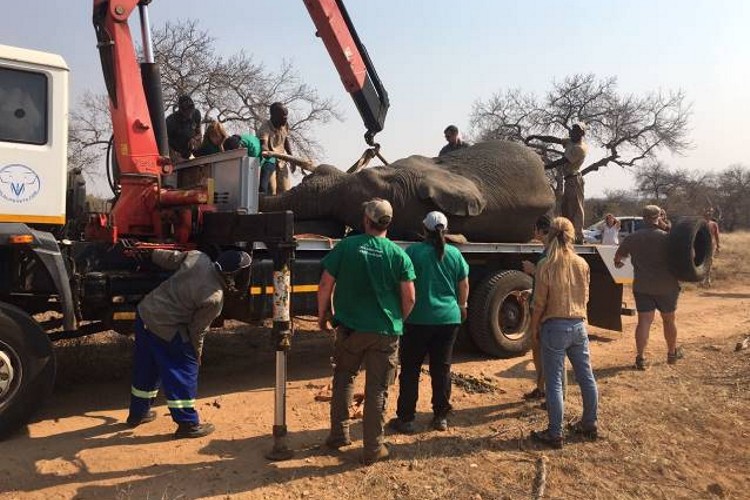 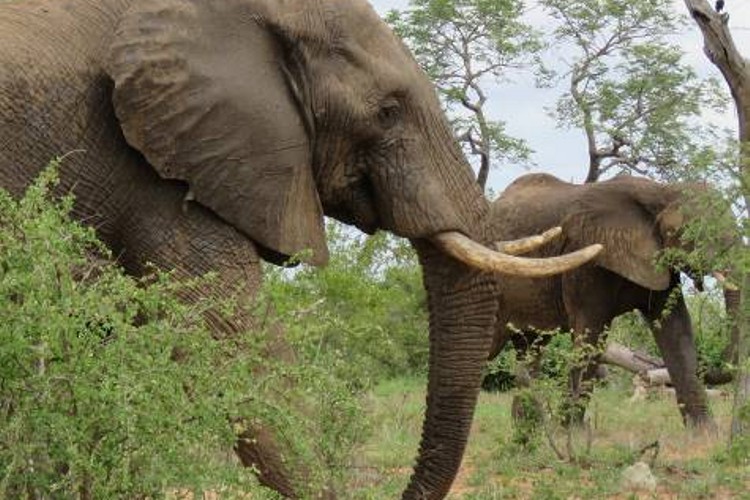 A sub adult elephant in a breeding herd was spotted on Ingwelala, carrying a cable around a hind leg, restricting blood flow in the ankle area. Vets were on standby to attend to this casualty and remove the cable when the herd wondered onto the neighbouring Timbavati Private Nature Reserve. The Timbavati staff, together with their Vet, successfully removed the cable. 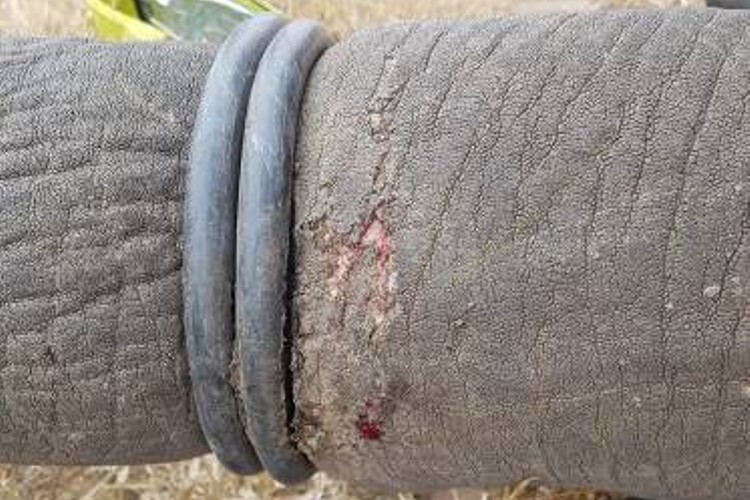 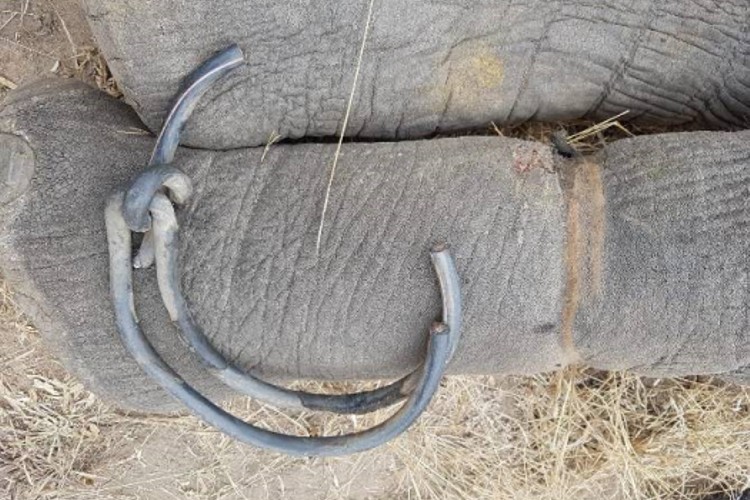 An unfortunate incident with an adult male nyala ensued when the nyala horned a Member close to their bungalow. It was an aggressive puncture in the groin area which penetrated the bladder and intestine. With the rapid response and assistance from Members and Staff, and medic provider Africa Safe-T coordinating with SATIB 24, the Member was airlifted to Nelspruit for emergency surgery and post op recovery in ICU. It is most pleasing to report that a full recovery was made.

It reminds us to never underestimate the temperament of wild animals, even those who frequent the camp and pool area, because as “relaxed” as they may seem, anything can happen. Expect the unexpected!

A new troop of baboons took to roosting in camp. Baboon spotters/monitors were employed to limit the troop’s foraging in camp. This approach has worked to a large degree, but it falls upon each of us to behave responsibly towards not habituating baboons to humans and associating our vehicles and bungalows with ready-available food. None of us would like a repeat of another entire troop being euthenased.

Due to the drought cycle and a stressed water environment, it was necessary to implement more stringent temporary water hole closures. Apart from the original closure of Hyena Dam, temporary closures were rotated with Aloe Ridge, Goedehoop Dam and Sibon Dam. This represents all four properties.

The table below was presented at a Members Information Evening in 2016, showing the weighted criteria for temporary rotational closures and necessity going forward. The resting of a stressed veld in the vicinity of the waterholes in a drought cycle is critical, as is the rotation of boreholes supplying the artificial watering points. 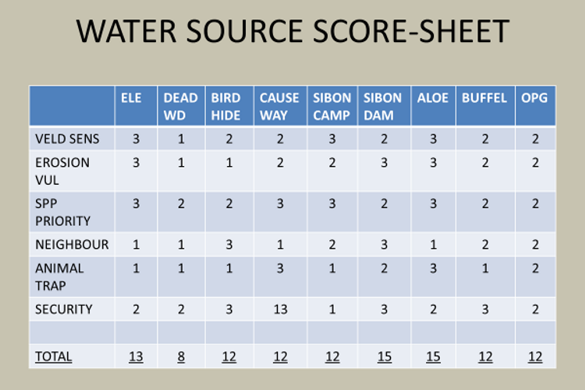 Several improvements to company infrastructure and communal facilities took place. In no order of priority, these projects were previously reported on in detail and included: 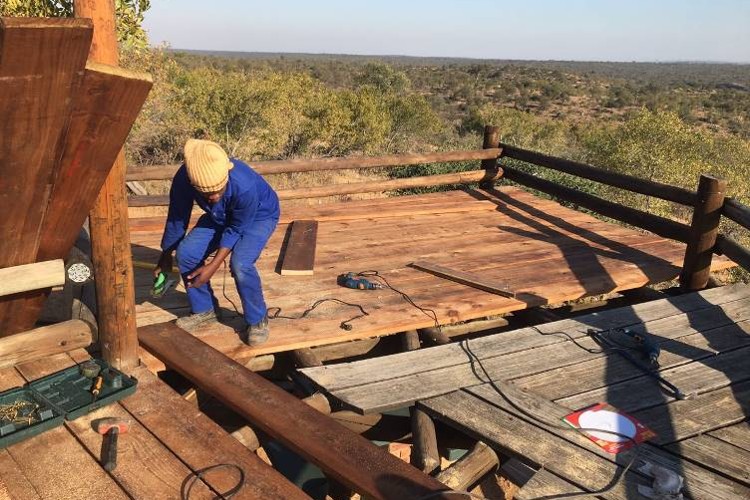 Replacing the decking at Beacon Boma 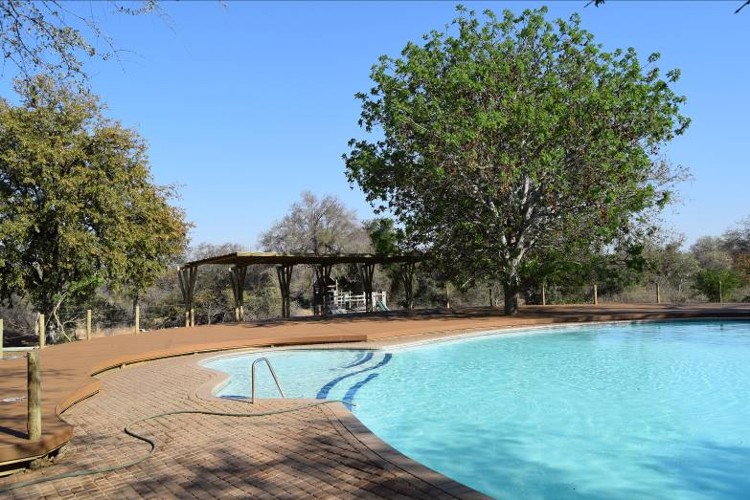 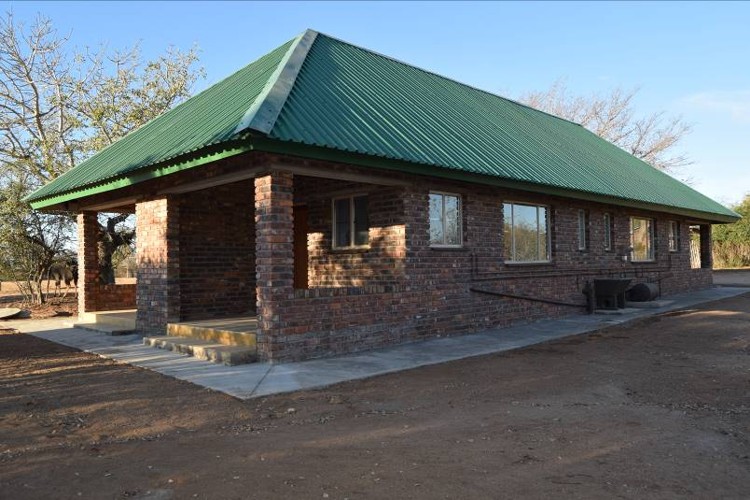 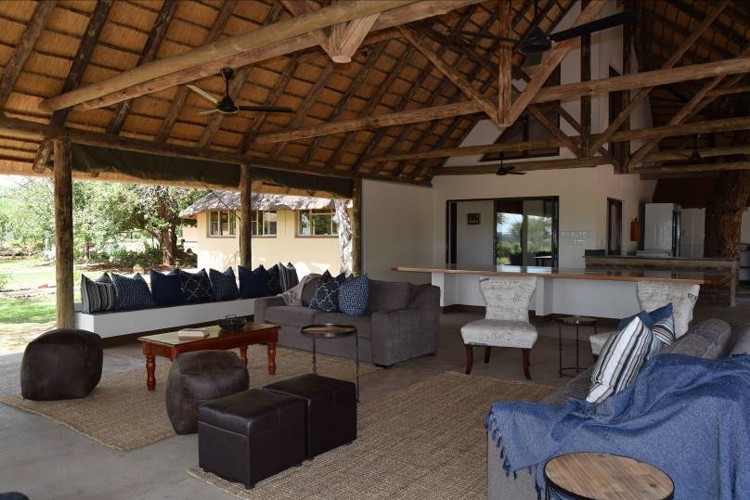 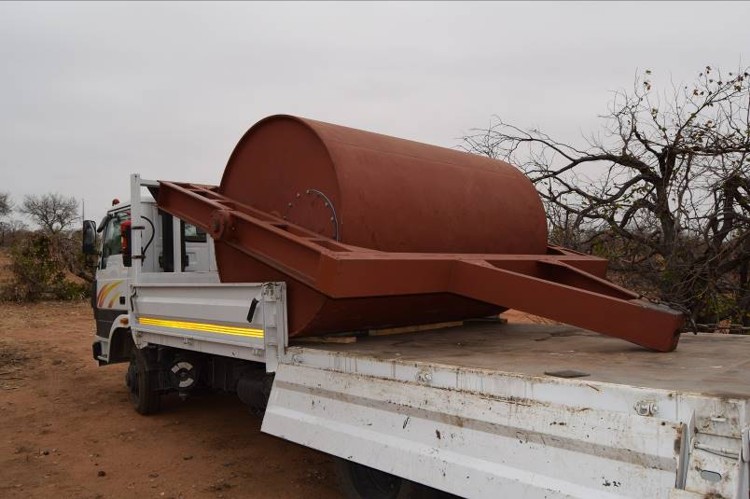 Tractor drawn roller to assist with road and airstrip maintenance

Last, but not least, was the significant upgrade to the Internet and WIFI connectivity available at the Members’ Area, Sibon, Vuka Ingwe, Umbabat Warden HQ and management staff houses. From a management perspective the upgrades have certainly added a valuable contribution from a security point of view where information can be shared in real time.

No reserve could function without the efforts of a suitably skilled staff complement.

In 2018 we bade farewell to Lisbeth Ndlovu who reached natural retirement age, and to Phyllis Makhubela who elected early retirement. Both Lisbeth and Phyllis’s valuable contribution in the workplace over many years is hugely appreciated. It was with much sadness later that we heard of Phyllis’s passing after struggling with an illness. 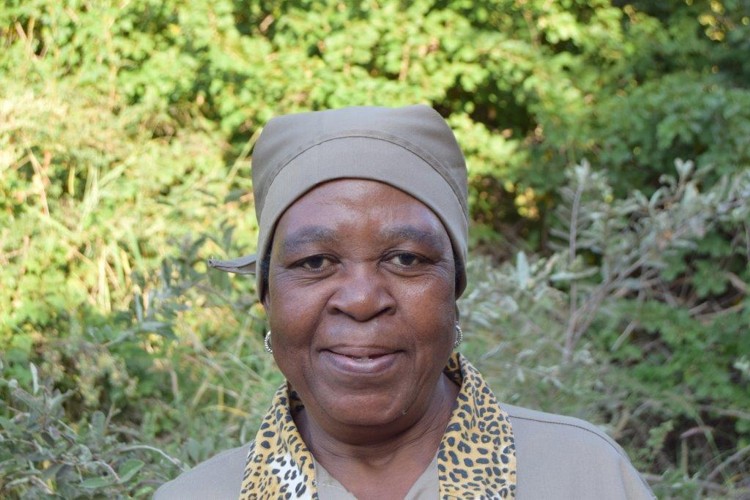 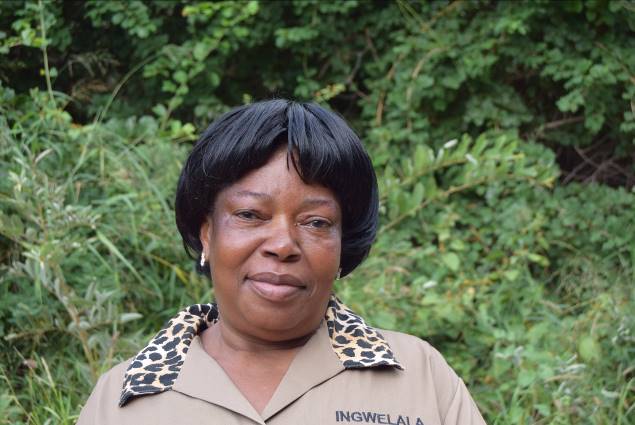 During the first half of 2018 there were changes in the management team, and we welcomed Dave and Adel Annandale, and Chris and Janet Mayes. Their introductions, profiles and work experiences were detailed in previous monthly reports.

In the section “Meet the Team” the following staff were profiled with their basic roles in the workplace as well as personal interests and family histories:

Staff changes in the Umbabat Private Nature Reserve was the appointment of the Umbabat Warden, Bryan Havamann, who joined early in the year. Bryan’s partner, Lindsey Jones, assists the Umbabat as Stakeholder and Communications Manager.

Our gratitude is expressed to Lydenburg Toyota who sponsor the Warden a Toyota Hilux Double Cab 4x4 and to Letaba Wireless who sponsor Internet and WIFI.

The table below is the result of the Umbabat annual game census which took place in September 2018: 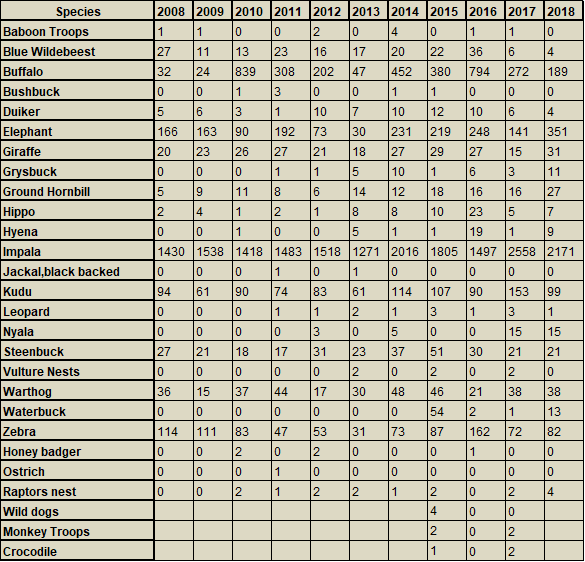