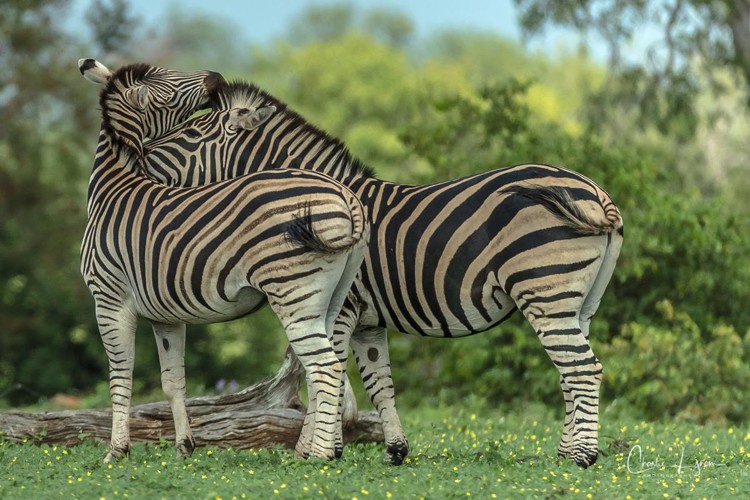 Every now and again one hears a sound at night which, although is entirely believable, still seems out of kilter. One such sound occurred the other night when a herd of zebras chose to be very vocal.

It seemed strange because in the five and a half years we have lived at Ingwelala I have never heard a zebra call at night. It was a particularly dark night, and from my sleeping location I judged the zebras to be running up and down from the direction of the air strip. In the early hours of the morning this distraction continued for a lengthy period.

Zebra herds are usually represented by tight knit family groups, a dominant stallion that protects a couple of mares and their off spring. Average numbers usually range from five to nine. These individuals rely heavily on each other for survival, especially for anti-predator behaviour. The experts reason that one of a zebra's best forms of defense against predation is to create confusion. They are able to achieve this by running together in tight formation where their collective stripes blend and blur so the predator cannot distinguish the shape of an individual zebra; the predator sees only a single moving mass.

The cacophony of zebra calls that accompanies the galloping is no doubt an orientation reminder to the herd where the lead animals are and also adds to confuse the predator. First you hear them here, then there, then back here again, and so the game of cat and mouse continues.

Pieter Nel confirmed via radio early that morning, before dawn, a lioness making her way down the road from the air strip towards the entrance gate, on this occasion the zebras free to graze another day.

Other times that zebras become quite vocal are at watering points when large numbers congregate. Zebras drink during the day (also anti predator behaviour, drinking during the warmer day light hours whilst the large nocturnal cats snooze during the day) and they vocalize at these large gatherings to advertise their family groups and to keep their respective groupings together. When you observe their behaviour closely there is always a lot of kicking and shoving and neck biting under these congested conditions, almost an endless power struggle for top dog position in the pecking order.

I have experienced too, under less pleasant circumstances, family groups being split up unintentionally during live capture, the remaining individuals calling and calling for days afterwards in search of missing siblings and parents.

Zebras are bulk grazers and therefore manage to eat a wide range of grasses, often course in texture, and many different species. In a grazing succession it is the bulk grazers which “open up” the veld for more concentrate grazers such as wildebeest, hartebeest, impalas and warthogs. For this reason you will often see an association with these other species. Zebras have excellent eye sight and will alert other prey species of a pending threat from predators.

Breeding is non-seasonal, where a single foal is born. Stallions taking over new herds will kill any juvenile zebras in the group. On mixed commercial game and livestock farms they are adept fence breakers.