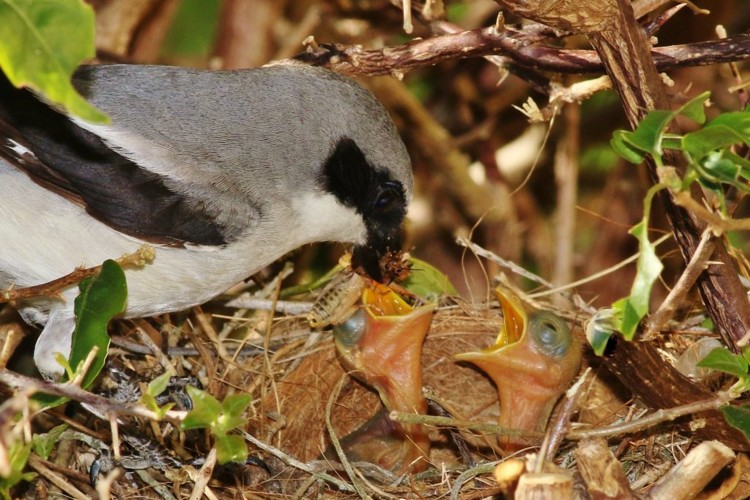 Thank you to Chris and Auriel Thorpe in Bungalow # 197 for sharing the fascinating world of the Southern White- Crowned Shrike (Eurocephalus anguitimens) and Black Cuckoo-Shrike (Campephaga flava) with us.

In November, within a couple of days of each other, we came across two different, but both incredible shrike nests.

The first was that of a flock of Southern White-Crowned Shrikes which we found on a night drive.

About fifty meters from the main road on the Goedehoop/Carlin cut line there are two Knob Thorn (Acacia nigrescens) trees on opposite sides of the road. The one tree had the alpha pair of Southern White-Crowned Shrikes with a nest of three nestlings in it, while the other tree had a cluster of the attendant flock of helpers, all huddled together. These birds are co-operative breeders with the dominant pair the only birds in the flock to breed, while the rest of the flock serve as attendants; bringing nesting material for the dominant pair to nest build, and help feeding the chicks when they hatch. The attendants also remove and dispose of the faecal sacs to ensure the nest is kept clean. The construction of the nest is amazing, with the body being woven of fine fibres, and bound together with spider web. The inside is lined with fine fluffy cotton-like material.

Note the display behaviour of the adult, (second picture down) with wings held out, seemingly in response to our presence. We are not sure of the function of this? Within a matter of days of taking these photographs the chicks had left the nest.

Around the same time that we found the Southern White-Crowned Shrikes’ nest we noticed a pair of Black Cuckoo- shrikes building a nest behind our bungalow. Both the presence, and nest building of Cuckoo-shrikes were firsts for us at Ingwelala.

Sexual dimorphism in these birds is extreme. The male is pitch black with yellow wing covets while the female is mottled green all over. It was the female that did all the nest building, collecting pieces of lichen and connecting these by using spiders’ web. The male was in attendance, supervising, and no doubt passing comment on building standards! The female chose a cleft in the Mopane tree behind the bungalow that already had heavy lichen cover. The nest was so well camouflaged that even though we were able to watch the activity we found it incredibly difficulty to locate. In fact, it was so well camouflaged that the best way to identify it was to photograph and zoom in.

Unfortunately, the nest was blown out of the tree during a huge storm. It was a work of art, with lichen and web woven on the outside, and the inside lined with soft cotton-like seed heads.

They did not rebuild and disappeared, and we wonder if our presence and interest did not disturb them. 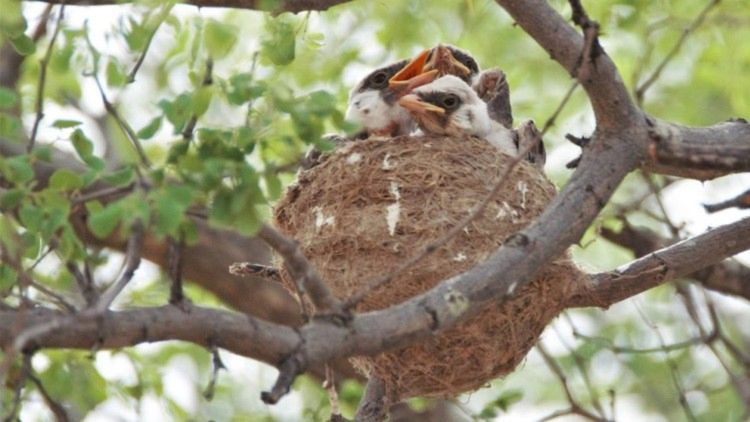 Close-up of nesting material and chicks 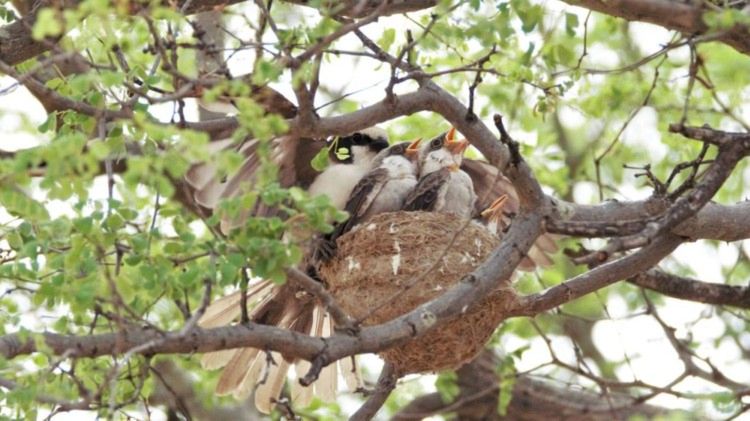 Adult display over the chicks 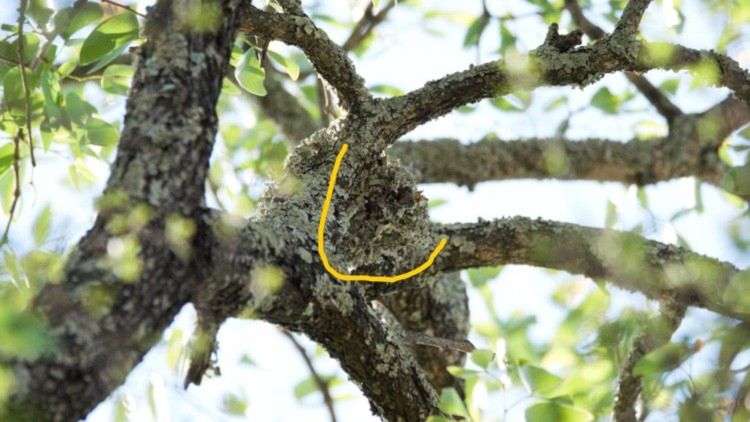 The location of the Cuckoo-shrike nest is marked.

By Chris and Auriel Thorpe - Bungalow 97.