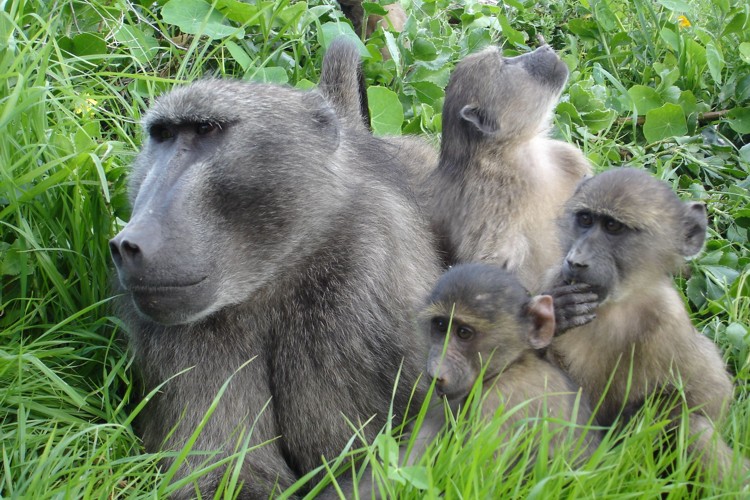 The Chacma baboon  (Papio ursinus) is a species that needs no introduction at Ingwelala. It is well known to all.

Despite its opportunistic behaviour of “break and entry” to source food in human dwellings and leave a foul trail of numerous unpleasant calling cards, it is a highly intelligent mammal that lives in a highly organised, social community. These organised communities are called troops in animal terms and have a demographic make-up not dissimilar to that of humans. The troop core is adult females with infants, accompanied by both sexes of various size and ages, and a small number of larger adult males with one dominant male – known as the alpha male. Males are dominant over females and considerably larger in body size. Troop sizes may vary considerably, depending on social and environmental conditions, 75 being an example of a large troop in the Lowveld. Baboon troops occupy territories where home ranges are approximately 25 square kilometers.

The alpha male and (when he is not looking) other competitive males demonstrate a herding type behaviour towards females in oestrous for reproduction purposes. The bright skin on the rump is known as callosite, which swells during the oestrus cycle of females, signaling reproduction status. Copulations are plentiful and without monogamy. A characteristic trait is a distinctive vocalization range through and post mating. Gestation is six months where after a single young is born. Recruitment in baboons is non seasonal. Infants rely on protection from their mother for approximately one year. Puberty occurs between 4-6 years. Chacma baboons are known to practice infanticide, where a newly instated alpha male may kill the offspring of his predecessor.

Its diet is diverse, being an omnivore. Fruits are the preference, with an accompaniment of leaves, seeds, grass, roots, small insects and vertebrates. It is a water dependant species, drinking regularly. Unfortunately, when baboons co-exist near human populations, scavenging occurs with negative interactions between man and beast. From a conservation perspective, these baboon populations require very close monitoring. Other primate populations in Africa are also under threat due to the increased demand for bush meat. A personal sadness is the use of animals in research laboratories.

It appears that troops defending territories from each other prefer to put on a visual show of strength rather than engaging in physical combat. A show of dominance behaviour typically includes loud barking, rocking to and fro, branch shaking, bark stripping, eye-rolling and false yawning (display of teeth).

Whilst out foraging, baboons are extremely vigilant in predator detection and move about in organised formation. The alpha male takes the lead and is followed on the extremities of their circle type formation by other mature and dominant males, the lowest in status bringing up the rear. The higher ranking females and their youngsters are protected in the inner circle. Feeding in trees also provides “sentries” an elevated position to detect any imminent threat to the troop. Inexperienced predators hunting baboons come off second best.

There is a close relationship between baboons and other browsing antelope which benefit from fruit, leaves and pods that baboons dislodge when feeding in tall trees.

Baboons can become extremely aggressive when cornered or provoked. Their unwanted “break ins” to bungalows at Ingwelala is a relatively frequent occurrence and once again on a marked increase. They can be very cunning, and will often return to bungalows where they previously had success in sourcing food. Should you unfortunately encounter baboons inside your bungalow be very careful not to position yourself between them and their escape route. In particular they show no fear of women and children. It’s far better to call management staff to assist you.