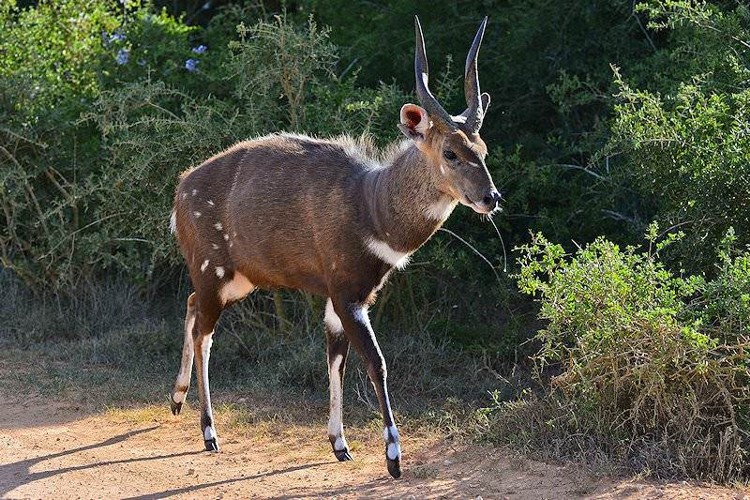 The topic of this month’s report is again one of those mammals that rarely get a mention in the Reception sightings book, the secretive and elusive Bushbuck.

While researching information on this mammal it became apparent to me that the large volumes of facts and points of interest so readily available with other mammals were simply not as easy to find. This seems fairly apt with regards to this shy and secretive antelope.

General
Bushbuck are the third member of the Tragelaphus family found in the APNR. They are a close relative to the Nyala and Kudu, all spiral-horned antelope. They are the only non-territorial and solitary antelope on the continent of Africa. Males and females will establish home ranges or preferred areas but will not defend these areas in any way. Males will avoid other males where possible even though home ranges do often overlap.

Appearance
Males and females have varying physical differences. Males have a fur colour that is darkish grey in appearance. This fur is further decorated by white splotches and white socks. The weight of an adult male will range significantly between 40 and 80 kg, while height will range between 70 cm to 90 cm. The females are distinctly smaller and lighter than the males, 25-60 kg in weight and 25-65 cm in height. Fur colour in the females is also of a reddish colour with distinctive white spots on the ears, tail, neck, legs and chin. Interestingly the further north we travel geographically the bushbuck fur colour will darken dramatically. This is all dependent on the habitat they frequent (rainforest versus Savannah thickets).

Habitat and Distribution
The Bushbuck is a very adaptable animal that can be found in rainforests, wooded savannah, semi-arid to arid savannah, Fynbos to Montane forest. Distribution in Africa stretches from the Cape to Angola along the eastern seaboard as far north as Chad including Southern Mauritania, Senegal, Sudan and Ethiopia.

Diet
As with their close cousins, Bushbuck are predominant browsers. Leaves, herbs twigs and flowers will form the mainstay of their diet. They are reluctant grazers but in drier time periods they will revert to this in order to survive.

Breeding
A pre-mating ritual does take place between the ram and ewe in the form of touching, resting heads on top of each other as well as vocalisation. The ewe will reach sexual maturity around the age of 14 months, while the male will reach his around the same time, however mating will only occur around the age of three years in the males (in all likelihood this is because of hierarchy among the older males within these small home ranges). A single calf is born after a gestation of approximately 6 months. The female will ingest the placenta after birth. The reasoning being to detract scent from predators. The calf will remain well hidden for the first 4 months of its life, the female returning to feed every few hours. Apart from the feeding the female will also eat all the dung from the young, reasoning the same as above. They are somewhat reluctant mothers, preferring the solitary lifestyle and spending only that time absolutely necessary to raise their young.

Population
Outside of predation by Leopard, Lion, Cheetah, Wild Dog and Python, the greatest threat to Bushbuck, as with all species, is man. Loss of habitat through human agricultural needs. Road construction and general human habitation remain its greatest threat. On a smaller scale the Bushbuck fur is sought after by the indigenous populations of rural areas in the form of hunting.

Bushbuck numbers however remain constant and their status is of least concern.

Facts researched from the internet, text by Chris Mayes.